BY Stormy Elizabeth on December 8, 2015 | Comments: one comment
Related : Soap Opera, Spoiler, Television, The Young and the Restless 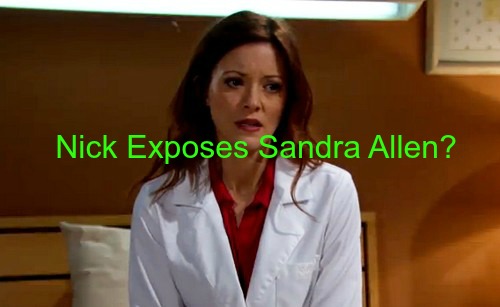 “The Young and the Restless” spoilers tease that Nick Newman (Joshua Morrow) may soon realize that Dr Anderson (Elizabeth Bogush) is not a caring shrink, but a dangerous devil in a white coat. Will it be this week that Nick figures out Dr A’s real identity?

Y&R rumors have teased for month that Dr Anderson is really Sandra Allen – a blast from Nick’s past. And when Dr A finally shared her first name “Sandy” with Nick, it resonated with fans that this spoiler is spot on and coming to fruition soon.

Dr Anderson tells both Nick and Dylan McAvoy (Steve Burton) that it’s not a good idea for Sage Newman (Kelly Sullivan) to spend any time around little baby Sully. Dr A claims this is a measure to protect Sage’s fragile mental state and help get past her grief.

But, of course, we all know it’s so Sage won’t recognize that Sully is really Christian. A mother knows her baby and when she held Sully at the christening, there seemed to be a flicker of recognition there, but then the moment passed.

Sage likely wrote it off to grief, but it’s far more than that. Nick has taken Dr Anderson’s advice to heart in recent days, but then Noah Newman (Robert Adamson) came down against Dr A and said Nick should not give Sage time alone – he thinks they should be a united front.

Noah will share his concerns with Mariah Copeland (Camryn Grimes) who also thinks that Dr Anderson is sketchy and thinks her limiting access to Sharon Newman (Sharon Case) was suspect and not therapeutic at all.

Look for Noah to talk to his dad Nick about their concerns that Dr Anderson may not have the best interests of their loved ones at heart, despite the degree on her wall and lab coat she wears. On the Friday, December 11th episode, this comes to a head.

Armed with suspicions, Nick asks Dr Anderson about her past. Has Nick begun to get a sense of déjà vu about the not-so-good doctor? How long before Nick pieces together that “Sandy” could be a nickname for “Sandra” and this is the girl who broke her neck in the Newman pool years and years ago?

Dr Anderson obviously has a wicked plot in play that’s focused on devastating the Newmans, particularly Nick. That means that she’s likely one of the many, many, many people done wrong by Genoa City’s most powerful family. Sandra Allen seems the likely option.

Nick may soon realize that she’s the Sandra of his past, but that doesn’t mean he’ll figure out the devious deception she’s carried out with the baby swap. And there’s one other question – is Sandra acting alone or she an agent of another malevolent force?

There have been some “Young and the Restless” gossip that Ian Ward (Ray Wise) is part of Dr A’s scheme. He sure gave up on Paragon pretty easily and let himself be taken back to prison. It’s doubtful that Ian is done with the Newmans and Abbotts, so this could be a valid tie-in.

Another big question is whether Dr A will come clean to Nick and tell him who she is or if she’s waiting to see if he’ll recognize her. It seems like Dr Anderson will hold back and wait for the most painful moment possible to reveal who she is, what she’s done, and why.

What do you think, is Dr Anderson really Sandra Allen from Nick’s high school days? If so, could anything that was done to her justify what she’s now doing to Nick, Sage, Sharon and Dylan? Share your thoughts below and stay tuned to CDL for more “The Young and the Restless” spoilers, news and gossip.