The Young and the Restless (Y&R) Spoilers: Noah Is Newman’s Secret Weapon – Chelsea Urges Victoria to Fight for Love 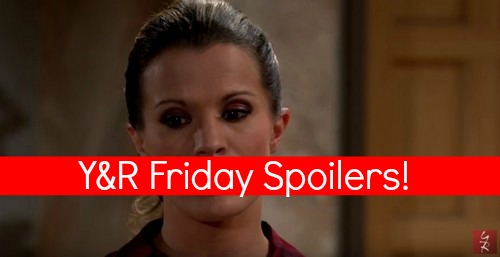 “The Young and the Restless” spoilers for Friday, December 18, tease that Adam (Justin Hartley) will have big plans for Noah (Robert Adamson). In Thursday’s episode, Victor (Eric Braeden) doesn’t have any luck getting out of his deal with the Santori family.

Victor just wants to pay them off and be rid of them, but Luca (Miles Gaston Villanueva) says they won’t allow it. As a result, Adam will think Noah could prove useful.

Y&R spoilers say Adam will declare that Noah has an important job. It’s up to Noah to bring down Luca and get the Santori family out of the Newmans’ business. Noah will believe he’s capable of handling this challenge.

He’ll suggest that he can be their secret weapon. Let’s hope that Noah doesn’t make things worse. The Santori family is quite powerful and they won’t be in the mood to play games.

Meanwhile, Chelsea (Melissa Claire Egan) will urge Victoria (Amelia Heinle) to give Billy (Burgess Jenkins) another shot. It seems Chelsea is worried about the road Billy is headed down. It could get ugly if Billy stays on this path. Victoria might be the only one who can save Billy from himself.

Chelsea will insist that Billy and Victoria share a rare kind of love that’s worth fighting for. Of course, Victoria is still furious with Billy. It’s been tough for Victoria to move past Billy’s foolish mistakes, especially since he continues to make them.

Victoria will have to decide if she’s willing to overlook Billy’s recent actions and focus on the future. It won’t be an easy choice. After all, Victoria has her children to consider. Billy could have a bad influence on them if he carries on like this.

In Friday’s “Young and the Restless” preview video, Abby (Melissa Ordway) notices that Billy smells like booze. Billy gives Abby the news that Jack (Peter Bergman) fired him and hints that it calls for a celebration.

Will Billy’s behavior cost him his potential last chance with Victoria? Stick with the CBS soap for updates on Billy’s downward spiral.