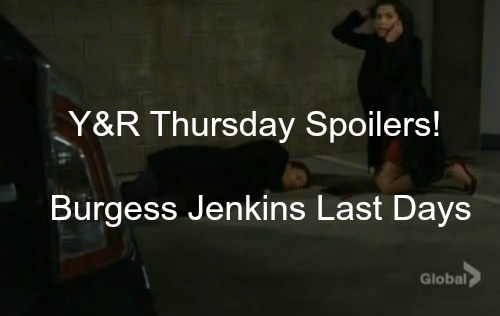 “The Young and the Restless” spoilers for Thursday, December 31, tease that big drama is about to go down. Billy (Burgess Jenkins) will run into some serious trouble when he can’t come up with the money he owes right away.

The bookie’s henchmen will beat up Billy and leave him unconscious in the parking garage.

At Top of the Tower, Stitch (Sean Carrigan) will check on Ashley (Eileen Davidson) after her fainting spell. Ashley will finally come to and everyone will urge her to get checked out at the hospital. Dr. Neville (Michael E. Knight) will mention that Ashley hasn’t had anything to eat.

Ashley will insist that she intends on watching Stitch and Abby (Melissa Ordway) tie the knot. They’ll return to the front and say their vows.

Afterwards, there will be toasts and dancing. Stitch will once again press Ashley to go to the hospital, but she’ll refuse. Stitch will meet up with Abby and they’ll decide to ditch the rest of the party. They’ll want to start off 2016 alone.

On their way out, Abby and Stitch won’t see Billy on the ground. They’ll make love in their room before catching their honeymoon flight.

At the New Year’s Eve bash, Adam (Justin Hartley) and Luca (Miles Gaston Villanueva) will discuss their plan. Luca will make sure Adam knows their deal is still in play. Meanwhile, Sage (Kelly Sullivan) will give Victor (Eric Braeden) updates on Nick (Joshua Morrow) and Faith’s (Alyvia Alyn Lind) move to the penthouse.

Dylan (Steve Burton) and Sharon (Sharon Case) will head home to enjoy a quiet celebration while the others stay for the countdown. As the clock strikes midnight, Kevin (Greg Rikaart) and Mariah (Camryn Grimes) will kiss. Luca and Marisa (Sofia Pernas) will lock lips, too. Noah (Robert Adamson) will watch them from nearby.

When Neil (Kristoff St. John) notices Hilary (Mishael Morgan) approaching, he’ll plant a smooch on Nikki (Melody Thomas Scott). Hilary will be stunned, but Neil will say Nikki is his good friend. Neil will add that he needs to move on with his life. After giving Hilary a peck on the cheek, Neil will walk away.

Devon will tell Neil he knows what he’s doing, but he doesn’t mind if he keeps it up.

Other “Young and the Restless” spoilers indicate that Dr. Neville will try to get to the bottom of what’s going on with Ashley. The doc will wonder if Ashley ate something to keep up appearances. Dr. Neville will point out that they were both lying.

At Jabot, Ashley will cry as she tosses out some papers. She’ll say the research is useless. Dr. Neville will show up in the doorway and remind Ashley that it saved Hilary. Dr. Neville will feel like he can help Ashley as well, but she has to be honest.

Ashley will finally come clean about her condition. Dr. Neville will get the brain aneurysm news. Ashley will talk about the surgery and the complications that have followed.

Dr. Neville will want to help Ashley find a cure and he’ll ask if she’s in or out. Ashley will agree to Dr. Neville’s idea, but she’ll want to keep it a secret from her family and friends. Back in the parking garage, Billy will cough and collapse when he tries to get up.

Noah will get in his car and accidentally put it in reverse. After making a few adjustments, Noah will drive off without noticing he ran over Billy.

Marisa will come down to find Billy all banged up. She’ll immediately call 911. Y&R viewers won’t want to miss the fallout of Billy’s ordeal. Stay tuned to the CBS soap to see what happens next.