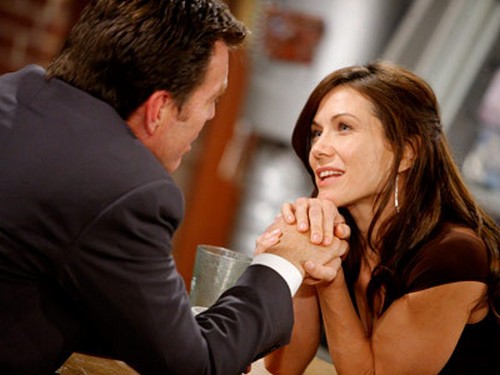 The Young and the Restless spoilers are starting to release the latest rumors swirling around about the return of Patty ‘Cakes’ William [Stacy Haiduk] to Genoa City late September 2015. We are hearing that Patty returns to visit her favorite brother Paul Williams [Doug Davidson] after many years of being away in a mental facility receiving psychiatric treatments for her mental illness.

Patty looks like the picture of health and has informed her big brother she’s now well and ready to get on living her life. Of course Paul is thrilled to have his little sister back in his life but others in Genoa City are scared to death of her return. As it works out, Patty is less cured than some would have hoped…. According to new Y&R rumors, Jack Abbott [Peter Bergman], who was once married to Patty and than was shot by her on two separate occasions, is extremely upset to hear she’s out and about acting like nothing ever happened. Patty also shot and killed Jack’s niece, Colleen Carlton [Tammin Sursok]. Victor Newman [Eric Braeden] than received Colleen’s heart when he needed a heart transplant after her mother, Traci Abbott [Beth Maitland], donated it to him.

Of course Jack assumes his dear old ‘pal’ Victor has sent Patty to wreck havoc in his life once more, following all that transpired with Marco. But The Moustache is just as unhappy about Patty’s return as Jack is.

More Young and the Restless teasers are letting us in on more spoilers. Patty is again looking for revenge on those who she perceives made her life a living hell. Top on her list besides Jack and Victor is Adam Newman [Justin Hartley]. Adam used Patty and her mental illness for his own selfish benefits. She also committed crimes for him for which she paid the price. Well this time, Patty holds the upper hand as she takes aim at Adam’s family including his wife Chelsea [Melissa Claire Egan] and their young son Connor! Patty’s devious and demonic antics will have Genoa City in terror right in time for the November sweeps – exactly as Chuck Pratt Jr. hopes. A character like Patty plays right into the Head Writer and Co-Executive Producer’s hands – Chuck loves crazy women!

What are your thoughts on Patty’s return to The Young and the Restless? Are you a Patty-Cake fan or is it like a ‘been there, done that’ kind of moment? Let us know in the comments below. Keep up to date with the latest updates and spoilers on all your favorite soaps right here on CDL.