The Young and the Restless (Y&R) Spoilers: Paul Seeks Driver Who Tried to Kill Billy – Victoria Turns on Comatose Victim 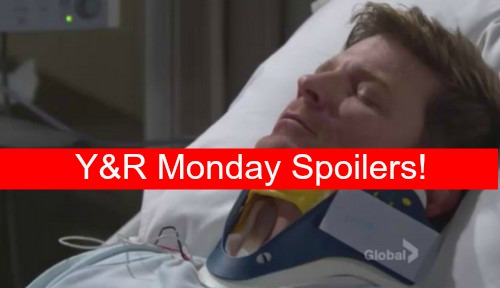 “The Young and the Restless” spoilers for Monday, January 4, tease that Billy (Burgess Jenkins) will be rushed to the hospital in critical condition. In Thursday’s episode, Billy takes a beating from his bookie’s henchmen and accidentally gets run over by Noah (Robert Adamson). Obviously, it was rough day for “Billy Boy.”

Marisa (Sofia Pernas) will be able to get Billy some help, but she may face tough questions once Paul (Doug Davidson) begins his investigation. Monday’s Y&R preview video shows Paul saying he wants to find the driver who did this to Billy. Since Marisa was nearby when Noah drove off, she’ll likely realize he was responsible.

Nevertheless, Billy was just in the wrong place at the wrong time. Noah inadvertently put the car in reverse and he had no idea Billy was back there. This was simply a freak accident, but Marisa will probably want to protect Noah anyway. It sounds like Marisa will be in a tight spot.

Elsewhere, Victoria (Amelia Heinle) will think Billy is the only one to blame for putting himself in a hospital bed. Jack (Peter Bergman) and Phyllis (Gina Tognoni) will listen as Victoria rants about the choices Billy has made. It appears Billy has blown the opportunity Victoria gave him.

Of course, we all know that Victoria will eventually come around like she always does. How many times have we heard Billy beg for one more chance? For some reason, Victoria just can’t seem to stay away for very long.

For now, Victoria will maintain that she’s done and Jill (Jess Walton) won’t be happy about it. “The Young and the Restless” spoilers say Jill will be furious when she learns Victoria and many of the Abbotts have turned their backs on Billy. Jill will believe Billy needs people on his side during a crisis like this.

At least Billy will still have Jill in his corner. Jill will sit by Billy’s bedside and tearfully plead with him to wake up. The situation will undoubtedly remain serious. When will we finally hear good news? Stick with the CBS soap for updates on Billy’s road to recovery.