BY Chrissie Williams on November 9, 2015 | Comments: 6 comments
Related : Soap Opera, Television, The Young and the Restless 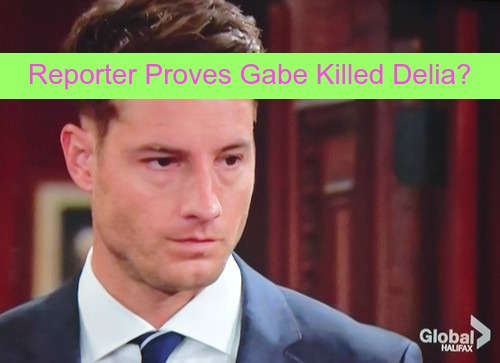 “The Young and the Restless’ (Y&R) spoilers tease that new evidence will turn up in the coming weeks that will vindicate Adam Newman [ Justin Hartley] in Delia’s [Sophie Pollono] hit and run conviction. Nearly every “Y&R” fans believe that Adam is innocent of running her over; it’s about time the evidence shows up to save poor Adam from his prison sentence.

“The Young and the Restless” spoilers hinted that a new character will be coming on canvas in the next few weeks that may have evidence to not only save Adam from going to prison but clear his name. The new character, who is a reporter stumbles upon a piece of information that shocks her. She finds out that Adam didn’t hit Delia – he only ran over her scarf. And, the real killer is Gabriel Bingham [Justin Hartley].

She found the information by a simple Google search. She was looking for the newest information on the case and found a post created by Gabe Bingham nearly two years ago. In the blog written in Gabe’s own words, he explained how he hit a little girl after a night of drinking too much. The journalist found the confessional to be credible and started checking the fact, and it was written the day after Delia’s accident.

The reporter felt compelled to come forward with the information. How could they sit on this when an innocent man could be sent to prison at any point for TEN years for a crime he didn’t do? Just when she was about to come forward and blow the whistle on the charade, she gets a visitor from a man who appears to be Adam- but it could be Gabriel too.

The reporter lets him know she left a message with Paul Williams [Doug Davidson] and told him she needed to speak to him about Adam Newman’s case. She asked if they were Adam or Gabriel Bingham because she learned from the medical examiner that Gabriel never died; the examiner confirmed it was an unknown homeless man whom Sage [Kelly Sullivan] swapped identities with Gabe.

Gabriel felt it was time to come out of hiding and clear up a few misconstrued facts. He wants to set the record straight but only if the journalist types exactly what he says and does not reveal his location until he tells her it is okay to do so. Will the reporter give in to Gabriel’s demands? What is Gabriel’s plan and why is he coming forward now? Don’t forget to come back later for juicier “The Young and the Restless” spoilers, rumors, and updates!