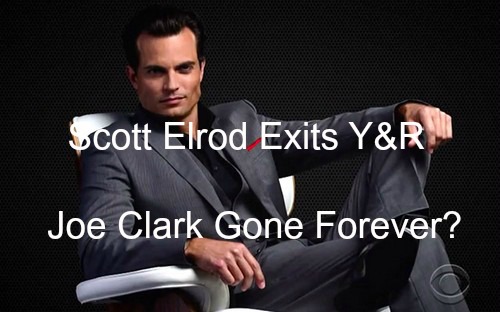 ‘The Young And The Restless’ spoilers  (Y&R) tease that Scott Elrod is officially out at the CBS soap, and Joe Clark will not be returning to Genoa City. Elrod’s character Clark was recently arrested and sentenced to 6 years in prison.

Joe Clark’s case was handled off-screen, but it was revealed in recent conversations that he admitted to extorting money from Devon (Bryton James), and he got a plea deal and was beginning his prison time immediately.

Scott Elrod’s exit was never really confirmed by TPTB at ‘The Young And The Restless.’ And, ‘Y&R’ fans weren’t entirely convinced that Joe Clark wouldn’t somehow work some magic and be back in Genoa City before we know it.

After all, how long does anyone in daytime dramas stay dead or in prison? But, according to this week’s edition of Soap Opera Digest, Scott Elrod’s last scene that aired on December 11 was his FINAL scene and Clark will not be returning to the CBS soap opera.

‘The Young And The Restless’ fans are a bit bamboozled by Scott Elrod’s unexpected exit – and the fact that the writers didn’t really give his character Joe Clark a proper sendoff or a grand finale. On the bright side, if you are a fan of Scott Elrod’s you can catch him on primetime now!

Elrod recently announced on social media that he had been cast on ‘Grey’s Anatomy’ to play the part of Dr. Thorpe. Scott Elrod is already filming at ABC’s studios, so his rushed exit may not have been the ‘Y&R’ writers’ fault – its unclear if Joe Clark leaving was written in to the script because Elrod started a new gig.

Or, if Elrod started on ‘Grey’s Anatomy’ because he know that his days were numbered in Genoa City. Regardless, we will definitely miss him!

So ‘Y&R’ fans, are you sad to see Joe Clark go? Do you think that ‘The Young And The Restless’ writers missed a huge opportunity with Elrod, and should have utilized the actor more while he was a part of the CBS soap?

Share your thoughts in the comments below! And, don’t forget to check CDL for all of your ‘The Young And The Restless’ spoilers and news.