The Young and the Restless Spoilers: See What’s Happening on Y&R Tuesday, December 22 – Christmas Party in the Works

BY Heather Hughes on December 20, 2015 | Comments: one comment
Related : Soap Opera, Spoiler, Television, The Young and the Restless 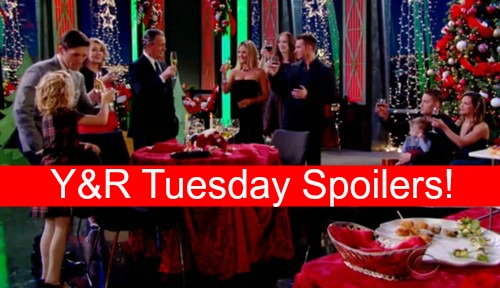 “The Young and the Restless” (Y&R) spoilers for Tuesday, December 22, tease that a celebration is in the works. Nikki (Melody Thomas Scott) will speak with Faith (Alyvia Alyn Lind) and a party will be the topic of conversation. Y&R viewers know that Faith is always up for a fun shindig.

Nikki will indicate that she’s going to talk to Victor (Eric Braeden) about it and she’s sure he’ll agree. Faith will seem excited as Nikki says they’ll have to plan something very special. Perhaps this is about a Christmas gathering or even a bridal shower for Abby (Melissa Ordway).

Whatever the case, it should be good for Genoa City residents to take some time to celebrate. There’s been plenty of turmoil lately and it will undoubtedly continue in the midst of the holiday bliss. At Newman Enterprises, Victor will be determined to rebuild. In order to do that, Victor will require his family’s support.

In Tuesday’s preview video, Victor insists that he’s going to need all hands on deck if they’re going to get the company back on track. When Abby asks if he means today, Victor will suggest that he wants them there today, tomorrow and every day until Newman is on top once again. They can’t let their opponents gain an edge.

Of course, it won’t be all work and no play as Christmas approaches. “The Young and the Restless” spoilers say Adam (Justin Hartley) and Sharon (Sharon Case) will have a chance to catch up at Crimson Lights. Between the Fairview drama and caring for Sully, Sharon has been pretty busy. This will be Sharon’s first opportunity to chat with Adam since the news broke about his true identity.

Things will be a bit tense at first, but Adam will manage to put Sharon at ease by marveling at Sully. They’ll soon start to bond over their happy families. However, Chelsea (Melissa Claire Egan) will worry about what Adam has gotten himself into with Victor.

Sharon will offer a sympathetic ear as Chelsea vents her frustrations. Stick with the CBS soap for updates on Adam’s attempt to keep his head above water.