‘The Young and the Restless’ Spoilers: Sharon’s Startling Admission – Victor Shot Jack by Mistake – Stitch and Ashley Heat Up 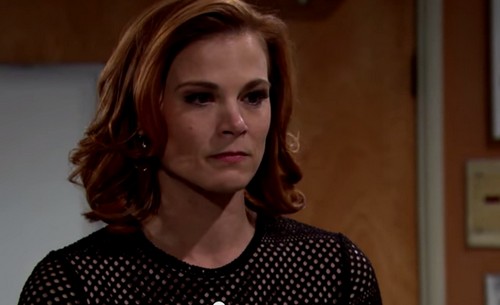 “The Young and the Restless” spoilers for the week of June 29-July 3 tease that several Genoa City residents will find themselves in grave danger. Jack (Peter Bergman) will be the victim of mistaken identity in the park. Victor (Eric Braeden) will fire a shot at Jack’s doppelganger, but Gabriel (Justin Hartley) will quickly realize that the real Jack is the one who took the bullet.

As Jack lies in a coma, Marisa (Sofia Pernas) will try to stop Marco (Peter Bergman) from making his getaway. Marisa will point a gun at Marco, but he’ll tell her to go ahead and shoot. There’s no way Marco’s ever going to turn himself in. Meanwhile, Nikki (Melody Thomas Scott) will open up to Neil (Kristoff St. John) about some details that could prove useful to Paul (Doug Davidson). Y&R rumors hint that Neil and Nikki will continue to bond in the coming weeks. If Nikki keeps drifting from Victor, things could take a romantic turn with Neil.

Other “Young and the Restless” spoilers reveal that Sharon (Sharon Case) will make a startling admission to Dylan (Steve Burton). Sharon recently revealed that she was pregnant and it’s already stirring up trouble within the family. Dylan will likely offer his reassurance, but we all know more trouble is bound to be on the way. Chelsea (Melissa Claire Egan) will also give Gabriel a shoulder to cry on. Gabe will undoubtedly be struggling with Jack’s critical condition and the knowledge he’s gained about Marco’s deception. Y&R viewers know that Gabriel is actually Adam and now he’ll have to keep Marco’s secret as well as his own.

Later in the week, Kevin (Greg Rikaart) will get some updates on the potential cabin killer. The information Kevin learns could lead to a major break in the case. It looks like the Scooby Doo gang will soon solve this mystery. Across town, Nick (Joshua Morrow) will butt heads with Victor as Lily (Christel Khalil) makes peace with Devon (Bryton James) and Hilary (Mishael Morgan). Relationships are making some huge shifts on “The Young and the Restless.”

Speaking of shifting relationships, it seems Stitch (Sean Carrigan) and Ashley’s (Eileen Davidson) dynamic could be changing in a big way. Stitch is with Abby (Melissa Ordway) now, but Ashley has made it clear she still has feelings for him. Another fling could be in Stitch and Abby’s future. As for Gabriel, all of his lies could cause his plan to crumble. When Gabe gets backed into a corner, will he have to face the consequences? Stay tuned to the CBS soap to find out if Gabriel’s new life will fall apart.

So Y&R fans, what do you think about the news that Jack will be in a coma? What will Sharon admit to Dylan? Will Kevin’s new clue lead him straight to the cabin killer? Will Stitch and Ashley hook up? Can Gabriel handle all the pressure? Let us know what you think in the comments below and don’t forget to check CDL tomorrow for the latest “Young and the Restless” spoilers, rumors, updates and news.

Enjoy The Young and the Restless video preview for Monday June 29, 2015 below.