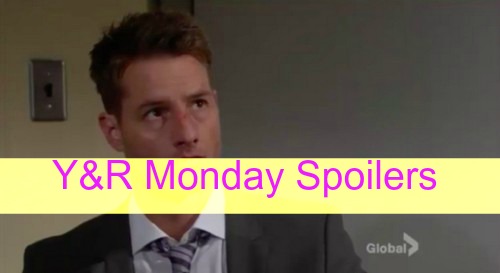 “The Young and the Restless” spoilers for Monday, October 12, tease that the anniversary of Delia’s (Sophie Pollono) death will cause some big drama in Genoa City. Jill (Jess Walton) and Esther (Kate Linder) will decide to plant a tree at the park to honor Delia’s memory.

Summer (Hunter King) and Kyle (Lachlan Buchanan) will agree to pick it up for them. Meanwhile, Billy (Burgess Jenkins) and Victoria (Amelia Heinle) will have a tough time coping with the sadness of the occasion. Billy will imply that locking Adam (Justin Hartley) up just doesn’t feel like justice.

Stitch (Sean Carrigan) and Abby (Camryn Grimes) will chat over coffee. Abby will turn down Stitch’s dinner invitation because of the family’s plans to remember Delia. Stitch will want to be there for Abby and provide support. At Chelsea’s (Melissa Claire Egan) penthouse, Anita (Catherine Bach) will wonder why Chelsea is trying to run away. Deep down, Chelsea knows she can’t hide from her feelings for Adam.

Chelsea will insist that how she feels doesn’t matter. It’s best to leave Adam in the past. Kevin (Greg Rikaart) will arrive to invite Chelsea to the planting of Delia’s tree, but she won’t know if that’s a good idea. Kevin will believe Chloe (Elizabeth Hendrickson) would appreciate it if Chelsea was there.

Other “Young and the Restless” spoilers reveal that Adam’s bail hearing will be swayed by Victor (Eric Braeden). Phyllis (Gina Tognoni) and Jack (Peter Bergman) will notice Victor shaking hands with the judge. They’ll accuse Victor of paying him off to get what he wants. Victor will reply that he’s just friends with the judge and that’s all there is to it.

Adam will plead not guilty and Christine (Laralee Bell) will declare he needs to remain in lockup. Victor will stand up to vouch for his son and the judge will set the bail at $10 million. However, Adam will have to remain in Victor’s custody while he’s out. Christine will be angered by the judge’s decision, but Michael (Christian LeBlanc) will contend that Adam won’t be a flight risk.

In a hotel room, a woman in a blonde wig will check the news and realize that Adam got out on bail. She’ll snap her laptop shut in anger. The woman will sneak into Chelsea’s penthouse to hide while Adam asks Anita about Chelsea. Anita will admit that Chelsea and Connor (Michael and Nolan Webb) went to Delia’s service. At the park, Delia’s loved ones will gather to plant the tree and there’ll be some tension when Chelsea appears. Fortunately, Billy will agree to let Chelsea stay as long as she doesn’t bring up Adam.

Jill and Billy will say a few words about Delia and they’ll all begin to water the tree. When Connor suddenly says “Daddy,” everyone will turn to find Adam standing there. Naturally, Billy will hit the roof. Before anything can go down, the woman who’s been lurking will step out of the shadows. It’s Chloe and it looks like she’s ready for an intense faceoff. Y&R rumors hint that things are about to get heated. Stick with the CBS soap for updates on the showdown that’s brewing.