The Young and the Restless (Y&R) Spoilers: Victor Meets Nick, Keeps Adam in Hot Water – Gwen and Hilary Face Off

BY Heather Hughes on November 20, 2015 | Comments: one comment
Related : Soap Opera, Spoiler, Television, The Young and the Restless 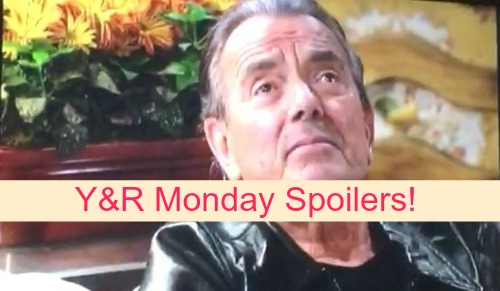 “The Young and the Restless” (Y&R) spoilers for Monday, November 23, tease that Cane (Daniel Goddard) will decide it’s time to prove he’s innocent. Cane is facing extortion charges and Lily (Christel Khalil) has struggled to stay on his side. They were already having problems thanks to Lily’s one-night stand with Joe (Scott Elrod), but their current crisis has truly sent them over the edge.

There could be hope for Cane and Lily’s relationship, but it’s going to take a lot of work. Cane just can’t get over the fact that Lily would doubt him. Cane may not be able to let go of his anger, but he’d still like to get rid of the charges against him.

“The Young and the Restless” spoilers say Cane will approach Paul (Doug Davidson) to ask for some assistance. Cane will announce that he needs to clear his name and he needs Paul’s help to do it.

Meanwhile, Neil (Kristoff St. John) could face backlash for a recent decision. In Friday’s episode, Gwen (Nadine Nicole) hints that Neil will be sorry if he chooses Hilary (Mishael Morgan) over her. Neil seems to have feelings for both women, but Gwen isn’t interested in sharing her man.

Monday’s preview video shows Hilary suggesting that Neil really does care for Gwen. Gwen will snap back that Neil doesn’t anymore. Gwen will add that Neil made his choice, so she made hers. Uh-oh. It sounds like Gwen’s wrath could be more than Neil bargained for. Y&R rumors indicate that Neil may regret getting Gwen tangled up in this mess.

Other “Young and the Restless” spoilers reveal that Victor (Eric Braeden) will stop by to see Nick (Joshua Morrow). Victor will probably ask how Nick is doing after his recent loss, but there’ll be a more important issue on his mind. Victor will give Nick updates on the situation with Adam (Justin Hartley) and let him know what his plans are.

Adam found himself in hot water with Victor when Ian’s (Ray Wise) body didn’t turn up at Newman Enterprises. If Adam can’t convince Victor that he’s telling the truth, his dreams of winning an appeal will be dashed. Will Adam find a way to get Victor back in his corner? Stick with the CBS soap to watch Adam’s uphill battle.

So Y&R fans, what do you think about the news that Cane will try to prove he’s innocent? Will Gwen make Neil wish he’d never got involved with her? Can Adam persuade Victor that he’s being honest about his encounter with Ian? Let us know what you think in the comments below and don’t forget to check CDL often for the latest “Young and the Restless” spoilers, rumors, updates and news.