The Young and the Restless (Y&R) Spoilers: Victor Suspects Adam Is Christian’s Father – Nick Breaks Down Over Baby Loss 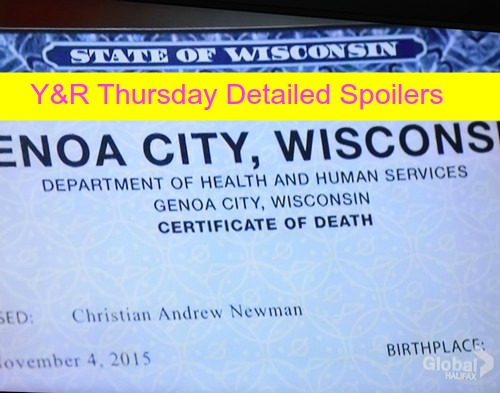 “The Young and the Restless” (Y&R) spoilers for Wednesday, November 11, tease that Neil (Kristoff St. John) will try to comfort Hilary (Mishael Morgan) as she struggles to get her memory back. Neil will assure Hilary that everything will return eventually. This whole ordeal hasn’t been easy for Devon (Bryton James) either. Neil will find Devon and encourage him to pay Hilary a visit. Anything they can do to jog Hilary’s memory will be helpful.

Devon will show up at Hilary’s suite and declare that their love can overcome the guilt she’s feeling. It sounds like Devon is hoping to close Neil’s chapter in Hilary’s life. A short time later, Hilary will remember something after looking through her wedding album. Hilary will tell Neil that she recalls his appearance at the ceremony when she was marrying Devon.

Paul (Doug Davidson) will receive news on the mix of prescriptions that Hilary was given. Dr. Shelby (Terrell Tilford) will note that an experienced doctor was undoubtedly behind these meds. Paul will also bump into Dr. Neville (Michael E. Knight), who’s posing as a floral deliveryman.

Dr. Neville will get nervous about answering questions, but Paul will just want to know if he’s seen anyone acting suspicious during his daily deliveries.

At the park, Dr. Neville will meet with Gwen (Nadine Nicole). Gwen will be concerned about Hilary recognizing him, but Dr. Neville won’t think that’s going to happen. Dr. Neville will give Gwen a prescription bottle and tell her to finish this on Hilary.

Other “Young and the Restless” spoilers say Billy (Burgess Jenkins) will indicate that he’s going to help Newman Enterprises and start a new life with Victoria (Amelia Heinle). Victoria will be hesitant to believe that Billy truly wants to assist Victor (Eric Braeden). Billy has been known to have a hidden motive or two when it comes to any interaction with the Newmans.

Christian’s memorial will take place at the chapel and the service will be a tearjerker. After a chat with Adam (Justin Hartley), Sage (Kelly Sullivan) will decide to attend. Once all the heartfelt speeches are over, Nick (Joshua Morrow) and Sage will get ready to head home.

As Sage grabs all her belongings, Nick will look at Christian’s death certificate. Suddenly, Nick will feel the gravity of his loss. Sage will watch as Nick sinks to the floor and sobs in total despair. Elsewhere, Dylan (Steve Burton) will tell Nikki (Melody Thomas Scott) that Sharon (Sharon Case) is having a boy.

In Adam’s room, Chelsea (Melissa Claire Egan) will notice that he seems really upset about his discussion with Sage. Later, Victor will stop by and suggest that he knows why Adam is so troubled. Victor will imply that Adam was actually Christian’s father.

Adam probably thinks the child’s paternity doesn’t matter anymore, but it could come back into play in the near future. Y&R rumors hint that Dr. Anderson (Elizabeth Bogush) has Christian hidden somewhere and will soon hand him over to Sharon. Stick with the CBS soap for updates on how the truth will come out.