The Young and the Restless (Y&R) Spoilers: Victor’s Shocking New Hire – Could it be Marco? 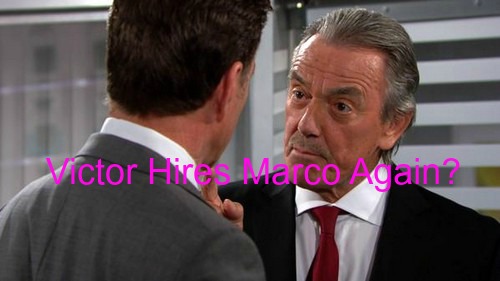 “The Young and the Restless” spoilers tease that Victor Newman [Eric Braeden] will hire a someone to work for him on Thursday, December 17 – someone who fans will find extremely surprising. Considering that Victor has worked with almost every character on the show, for it to be a shock the fans it must be someone extraordinary.

Is it possible that the person Victor hires could be Marco Annicelli [Peter Bergman], Luca Santori [Miles Gaston Villanueva], Ian Ward [Ray Wise], or Natalie the computer geek [Mara McCaffrey]? Well we know it can’t be Natalie since she doesn’t debut until mid-January.

If Victor hired Marco, in order to have him implicate Jack in criminal behavior, he might throw Jack Abbott [Peter Bergman] off this game plan. Since Jack is insisting on a public reveal of Victor’s crimes having Marco solidly in The Moustache’s corner makes sense.

Marco’s arrival in town as Vic’s stooge would upset Jack and Phyllis [Gina Tognoni], and they would likely withdraw the lawsuit, offering to pay Victor the money he demanded [$500 million] for the damages of Paragon virus.

Marco’s presence in GC would be enough to send Phyllis reeling, and gunning for Victor – a battle that she would surely lose.

Luca is the most likely partner for The Moustache. With Luca comes his family’s loot, which could save Newman Enterprise from losing everything right now. Victor told Noah Newman [Robert Adamson], he planned to work with Luca because his family has connections. Victor isn’t worried about any criminal activity from the Santori family; after all, they have never been ‘convicted’ of anything, right?

Wouldn’t it be a hoot if Ian Ward and Victor put aside their differences to partner together to bring Jabot down? The duo would be a force to be reckoned with, and no one would be able to stop them. Ian could help Victor bring greatness back to Newman Enterprises.

The only problem with hiring Ian Ward would be; he wouldn’t be able to trust the despicable man. In truth, the probability of Victor and Ian working together would be one in ten million.

Natalie [Mara McCaffrey] should be arriving in Genoa City in mid-January. The word on the Internet is she a computer hacker whom Victor plans on luring to Newman Enterprise. Natalie is also the woman whom Kevin Fisher [Greg Rikaart] talked about with Mariah [Camryn Grimes], and sounded completely smitten with her. Kevin was beyond thrilled that she understood and expressed interest in the same hobbies as he.

They are being painted as a match made in heaven. It only makes sense that Victor would lure this Natalie genius to work for Newman Enterprises – but since we know her first air date is January 15 we know Natalie isn’t the mysterious new hire. Who do you think Victor will be hiring to work for him on December 17? Don’t forget to come back to CDL later for more “The Young and the Restless” spoilers, gossip, and updates!