The Young and the Restless (Y&R) Spoilers: Who Set the Halloween Gala Fire – Who Dies, Who Saves the Day? 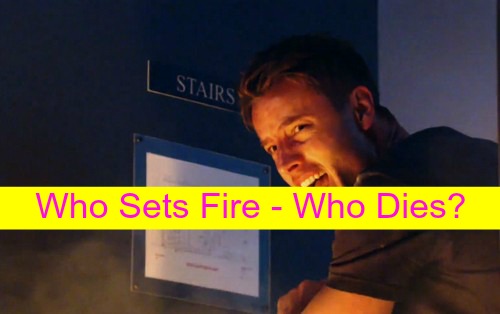 The “The Young and the Restless” (Y&R) spoilers takes a look at the big Halloween Gala at the Top of the Tower to honor little Delia Abbott. Although Nikki Newman (Melody Thomas Scott) and Phyllis Summers (Gina Tognoni) are trying to put their differences aside for the benefit party, the sparks are still flying. Unfortunately, those won’t be the only sparks – we know that a blaze will start that will cost the lives of at least four characters.

We’ve already seen a culprit with a computer and black gloves lurking around Newman Towers. But is this the fire bug or a red herring? Giving the flickering lights throughout Newman Towers while the possible terrorist was tampering with the electrical room, we certainly have good reason to fear that he or she is the real thing! For our added concern, the suspected arsonist made off with an invitation to Halloween Gala from The Moustache’s desk.

Could that be Ian Ward (Ray Wise) hacking to embed Paragon deeper into the IT systems there – or is someone else with tech skills turning off safety systems to ensure the blaze will take lives because the fire alerts and sprinklers won’t work?

Another possible culprit is the shady Dr Anderson (Elizabeth Bogush) who may be Sandra Allen back for some Newman revenge. Marco (Peter Bergman) or one of his henchmen is certainly a possibility as well.

Chloe Mitchell (Elizabeth Hendrickson) is certainly angry enough to hurt people, but she was arrested. Could she be bailed out before the gala?

In addition to who starts the blaze are considerations of who could die as a result. “The Young and the Restless” rumors indicate that Stitch Rayburn (Sean Carrigan) is exiting the show and may be a casualty of the fire. We may see Ashley Abbott (Eileen Davidson) admit her feelings to Stitch – will Abby Newman (Melissa Ordway) overhear a love confession by her mother?

How horrible a twist would it be if Connor Newman (Gunner and Ryder Gadbois) died? It would tear Adam and Chelsea up if they lost Connor at a benefit honoring Delia whose life was lost and whom Adam was convicted of killing. Fingers crossed that there are no child fatalities in the blaze…

Ian is another possible victim of the fire – which would be just desserts if he’s the one who set the deadly blaze – of course Ian’s in jail but that didn’t stop him before. Other rumored potential victims include Joe Clark (Scott Elrod) and Michael Baldwin (Christian LeBlanc).

And what about Esther Valentine (Kate Linder) as a potential victim? With Katherine Chancellor (Jeanne Cooper) gone and Chloe rarely around, seems like she’s kind of disposable – even though she’s a beloved party of the Genoa City scenery.

Colin Atkinson (Tristan Rogers) was on the radar as a possible victim since it was announced that Rogers was returning to General Hospital to reprise his role as legacy character Robert Scorpio. However, it looks like the GH part may be more of a visit than a permanent casting change and Tristan is assured of continuing on in GC.

We’ll also see Victor Newman (Eric Braeden) and Jack Abbott (Peter Bergman) put aside their differences to save the lives of those they love.

It looks like few Genoa City residents will avoid a harrowing moment or two during the big gala blaze. But most will survive – except the fated four – one of which is going to be a “major” character according to Chuck Pratt Jr. himself. Stay tuned to CDL for more “The Young and the Restless” spoilers, gossip and news every day.