The Young and the Restless (Y&R) Spoilers: Who Tried to Murder Adam – Victor Blames Billy, Chloe a Suspect 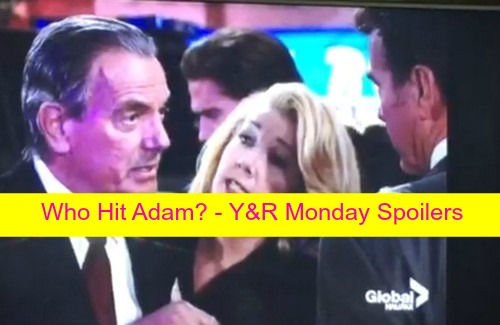 “The Young and the Restless” spoilers for Monday, October 26, tease that Michael (Christian LeBlanc) will try to convince Paul (Doug Davidson) that someone was on a mission to murder Adam (Justin Hartley).

In Friday’s episode, Adam is found guilty and sentenced to 10 years in prison. As he heads outside to be transported, Adam is struck by a speeding car. In the preview video for Monday, Michael will insist that this was not an accident. No one heard any screeching brakes. There was no attempt to stop the vehicle. It’s clear that the driver intended on killing Adam.

As Michael searches for the truth, Victor (Eric Braeden) will want to get to the bottom of things as well. At the scene of the accident, Victor will hurl accusations around. Jack (Peter Bergman) will look stunned as Victor suggests Billy (Burgess Jenkins) was behind this.

Victor will shout that “Billy Boy” left the courtroom just before Adam’s sentencing. Maybe Victor thinks what Billy said on the stand was all for show. Victor will demand answers for what’s happened to his son.

Of course, Billy just forgave Adam and his speech certainly seemed genuine. Based on Friday’s episode, it appears Billy was in the park talking to Victoria (Amelia Heinle) while Adam was being sentenced. Victor always wants to blame an Abbott when something happens to a Newman. However, this time someone else is likely at fault.

When Chloe (Elizabeth Hendrickson) showed up in town, she nearly gunned down Adam in right front of Delia’s (Sophie Pollono) tree. Chloe also mentioned a possible murder plot during a conversation with Billy. Could Chloe be the one who put the pedal to the metal?

Perhaps Chloe decided that jail simply wasn’t a good enough punishment for Adam. Chloe wants Adam to pay the ultimate price for taking her daughter away from her. Chloe might’ve tried to kill Adam in the same way he took Delia’s life.

Delia’s death was a tragic accident and most “Young and the Restless” viewers don’t even think Adam was the one who hit her. Regardless, many Genoa City residents hold Adam responsible for what happened that night. Who else would be willing to leave tire tracks on Adam to get revenge? Y&R rumors hint that some twists might lie ahead in this storyline. Stick with “The Young and the Restless” for updates on who’s behind the wheel.

So Y&R fans, what do you think about the news that Michael will push Paul to investigate? Will the police figure out who struck Adam? Who could be the guilty party? Voice your opinion in the comments below and don’t forget to check CDL often for the latest “Young and the Restless” spoilers, rumors, updates and news.