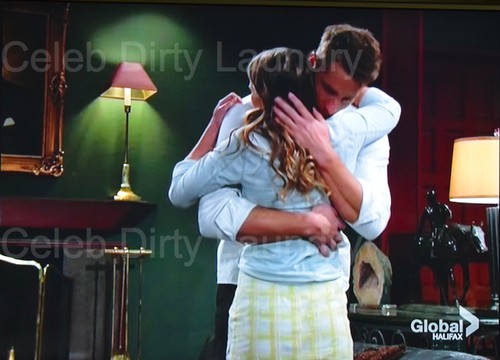 “The Young and the Restless” spoilers for Tuesday, July 14, tease that Chelsea (Melissa Claire Egan) will question Gabriel (Justin Hartley) after she overhears him toasting himself as Adam Newman. Gabe will try to deny it, but Chelsea will demand the truth. Adam will come clean and tell Chelsea the whole story. Chelsea will be hesitant to believe it, but Adam will explain that Gabriel died saving him in a fire. Adam will say that Sage (Kelly Sullivan) helped him falsify the necessary documents and gave him Gabe’s face. Chelsea will say that Adam wouldn’t go along with that, but Adam will insist that she knows it’s him deep down. Chelsea will hold Adam’s face and they’ll embrace.

Chelsea will wonder why Adam waited so long to tell her. Adam will reply that he wanted to protect her and this is their second chance. Chelsea will think everything was a lie, but Adam will say he knows that she loves him. Adam found his way back to Chelsea and it seems they’re meant to be. Adam will declare that they’re forever, but Chelsea won’t be convinced just yet.

Chelsea will learn that Jack (Peter Bergman) was in on all of this. Adam will say that Jack was protecting Billy (Burgess Jenkins) and he’ll explain how Billy shot him just before he was going to confess to hitting Delia (Sophia Pollono). Chelsea will look at Adam’s bullet scar. Talk will turn to the Adam’s blackmail of Victor (Eric Braeden) and Chelsea will shout that Adam hasn’t changed. Chelsea will want Adam to turn himself in, but he’ll yell that he doesn’t want to lose her again. Chelsea will hint that she doesn’t know if she can get past this.

Other “Young and the Restless” spoilers reveal that Paul (Doug Davidson) will say that he has to arrest Avery (Jessica Collins) since a shots were fired. Dylan (Steve Burton) will ask Joe (Scott Elrod) if he’ll consider dropping the charges. Joe will be angry that Dylan is concerned about Avery’s career after everything he did to him. After being tied to a chair and beaten by Dylan, Joe will feel like he’s a victim here. Michael (Christian LeBlanc) will tell Avery that Joe will drop the charges if she’ll apologize. Avery will pipe up that she’s sorry she ever met Joe and she’s sorry that she didn’t shoot that bullet in his face.

Dylan will go to Sharon (Sharon Case) and indicate that Avery needs help. However, Dylan won’t be the one to provide it. Back with Michael and Avery, he’ll tell her that she needs to get some rest. Avery will say that she can’t continue to practice law because she didn’t trust in the legal system. Avery wanted to take matters into her own hands and kill Joe. Michael will think she just needs a few days off, but Avery will say that she needs more than that and she has to leave town.

Jack will have a major setback at the hospital and Phyllis (Gina Tognoni) will leave him to rest. Phyllis will confront Victor about the number two that Jack wrote. Victor will play dumb and insist that he’s just as baffled as she is. Phyllis will say that Jack will clear all of this up when he wakes up. Meanwhile, Joe will give Paul the news that he’s dropping the charges against Avery. Suddenly, Cane (Daniel Goddard) will appear and punch Joe for sleeping with Lily (Christel Khalil). After Joe’s recent behavior, most Y&R viewers would agree that this is a satisfying punch. The rumors hint that Cane and Lily’s marriage will get worse before it gets better. Stay tuned to the CBS soap for updates on their relationship.