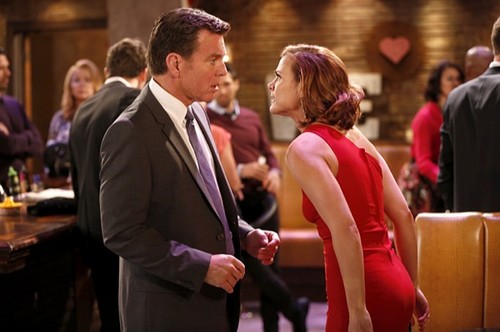 “The Young and the Restless” spoilers for the week of February 23 – 27 tease that fans of the CBS soap will not want to miss a single episode, and rumor has it Y&R viewers are in for another week of exciting drama. All hell broke loose in Genoa City during “Disaster Week,” and spoilers tease that the week of February 23 will resolve some of the aftermath of the plane crash, fire, building cave-in, and poisoned party at the Abbott Cabin.

“The Young and the Restless” spoilers and coming and going news for the week of February 23 tease that Lachlan Buchanan will debut on Wednesday’s episode of the CBS soap as Kyle Abbott. Considering the fact that Austin (Matthew Atkinson) was just “murdered” at his family’s cabin – it’s not surprising that Kyle is back in town, and if Austin is really dead (spoilers CDL presents this weekend show he is ALIVE!) – Kyle could even have something to do with the mystery. Or, he may have returned home to comfort his old flame Summer Newman (Hunter King).

In other “The Young and the Restless” news, spoilers for the week of February 23 reveal that Y&R fans can also expect to see another character’s life hanging in the balance. When Neil Winters and his family’s plane crashed in the snowy mountains, Neil (Kristoff St. John) seemed to emerge from the wreckage unscathed. However, some new spoilers tease that Neil may not survive! The last time we seen Devon’s father he wandered away from the wreckage with the map, presumably to find help, but apparently he didn’t get far and the bitter cold is taking a toll on him and no one can find him!

Y&R spoilers also tease that all of the trauma of “Disaster Week” forges a strong bond between Sage (Kelly Sullivan) and Nick Newman (Josh Morrow), and after a trip to the hospital and a clean bill of health for both of them – their emotions get the best of them and they share another kiss – only this time Adam/Gabriel catches them. Although we all know the truth behind Adam (Justin Hartley) and Sage’s “marriage,” the last thing he wants to see is his “wife” kissing his brother. And be prepared for some crazy violent fireworks as Phyllis learns about Jack’s tryst with Kelly

So Y&R fans, do you think that Kyle Abbott has anything to do with the mystery unraveling at the Abbott Cabin? Will Neil survive in the cold snow or will hypothermia settle in? Do you think Nick and Sage are crossing a line? Will Adam/Gabriel put a stop to their budding relationship? Let us know what you think in the comments below and don’t forget to check CDL tomorrow for more “The Young and the Restless” spoilers and news.