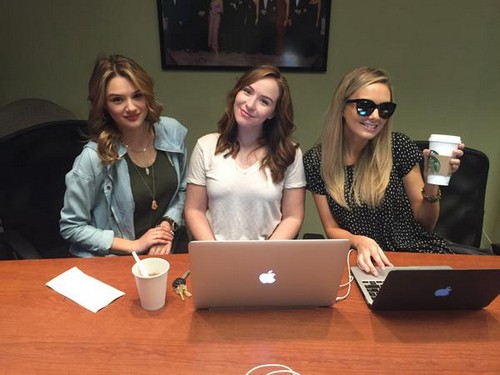 “The Young and the Restless” spoilers hint that several Genoa City residents may be in for a rude awakening on an upcoming episode. Summer (Hunter King) could soon discover that her husband was not the man she thought he was. It looks like Austin’s (Matthew Atkinson) documentary was going deeper than anyone realized. Now everyone will be left wondering what Austin was planning to expose and whether his knowledge of the ugly truth led to his death.

As much as Abby (Melissa Ordway) doesn’t want to believe it, Austin may have been using her to dig up dirt on the Newman family. Then again, there’s always the possibility that Austin isn’t really dead. For all we know, Austin faked his death as part of an elaborate scheme. Still, Noah (Robert Adamson), Courtney (Kelli Goss), Mariah (Camryn Grimes) and the rest of the crew will need to watch their backs. The latest “Young and the Restless” spoilers video indicates that they’ll receive a threatening message that will make them fear for their lives. With rumors swirling that the cabin killer will strike again, who could be the next character to bite the dust? Stay tuned to “The Young and the Restless” to see if another death will shake things up.

As everyone tries to get to the bottom of Austin’s mystery, Nikki (Melody Thomas Scott) will want Neil (Kristoff St. John) to keep their secret under wraps. Y&R viewers know that Neil was responsible for the car accident that injured Christine (Laralee Bell) and killed her unborn baby. However, Neil had been drinking and he could be looking at serious jail time if he comes forward with the truth. Since Nikki doesn’t want Neil to throw away his future over one tragic mistake, that really just leaves one other option: let Nikki take the fall. However, both Paul (Doug Davidson) and Christine are convinced that Nikki ran her down on purpose. “The Young and the Restless” spoilers tease that Nikki will try to get Neil to keep his mouth shut, but will he really stay quiet if Nikki might face criminal charges? Stick with the CBS soap to find out just how far Neil will let this go.

So Y&R fans, what do you think about the news that Austin was up to no good? Did you know he was playing dirty all along? Was it all an intricate plot or is Austin really dead? Do you think the killer will seek out another victim if the cabin crew doesn’t shut up? What about Nikki and Neil’s secret? How long can they hide the truth? Let us know what you think in the comments below and don’t forget to check CDL tomorrow for the latest “Young and the Restless” spoilers, rumors and news.