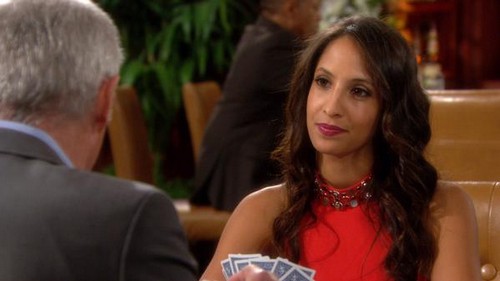 “The Young and the Restless” spoilers tease that the episode of the CBS soap airing on February 6 will be another exciting one for Y&R fans. Rumors and spoilers have been teasing for months that Neil Winters is going to regain his eye sight and catch his wife Hilary having an affair with his son Devon. And, according to “The Young and the Restless” spoilers, Friday is finally the day that the truth comes out.

“The Young and the Restless” spoilers tease that Cane is not happy about having to hide Devon and Hilary’s affair from his wife Lily. So, when Neil (Kristoff St. John) can’t find Hilary – Cane kindly informs him that he has seen Hilary headed into Devon’s bedroom and when Neil goes to investigate, he walks in on Devon and Hilary in bed together. Now, according to “The Young and the Restless” spoilers, Neil miraculously gets his eyesight back at the same moment that he walks into Devon’s (Bryton James) room, so he sees Hilary in bed with him. We can’t help but wonder if it is all another one of those dream sequences that the Y&R writers are so fond of, because it just seems odd that Neil can miraculously see again at the same second he opens Devon’s door. Sadly, we have to wait until February 6th to find out for sure.

In other “The Young and the Restless” news, the aftermath of Nick (Josh Morrow) and Sharon’s custody case continues to shake things up for some of our favorite Genoa City residents. Sharon Newman (Sharon Case) is devastated and heads home by herself – where she begins playing with fire and fantasizing about burning down Victor’s old house. Meanwhile, at Nick’s house, Faith is having a nightmare so Nick calls Sharon in to help and naturally Sharon saves the day.

Also, “The Young and the Restless” spoilers tease that on February 6 Y&R fans can expect to see Mariah make plans to move in to Kevin’s house since her mother Sharon kicked her out for not lying in court. Also, Summer (Hunter King) continues to celebrate Sharon’s loss, and Austin gets reprimanded for not notifying Nick of the structural work that his club desperately needs and is in some hot-water with a code inspector.

So, Y&R fans, do you think that tomorrow is the day that Neil really catches his wife cheating on him with his son, or is it just another dream? Do you think that losing Faith could cause Sharon Newman to go over the deep end and become certifiably crazy again? Would she start another fire? Let us know what you think in the comments below and don’t forget to check CDL tomorrow for more “The Young and the Restless” spoilers and news.