The Young and the Restless Spoilers: Detective Harding Working With Marco and Victor – Cabin Killer Must Choose Sides 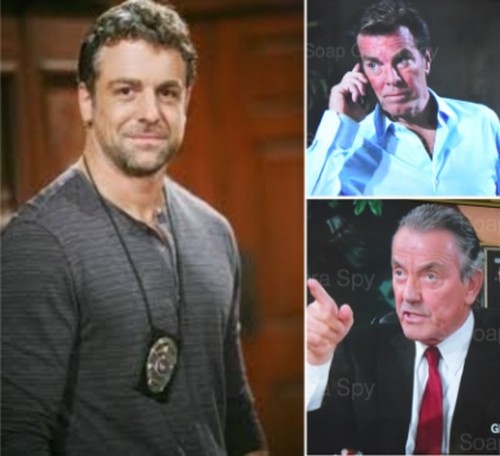 The Young and the Restless spoilers explain how Marco and Detective Harding may be confederates and jointly responsible for much Y&R evil in Genoa City. It is now August and the Cabin Killer “Mystery” if that’s what you want to call it is still dragging on – note that the TPTB PROMISED a big surprise and a twist at the closure. Oh we can hardly contain ourselves (eyeroll).

As all of you already know this storyline started in February and we are almost through a whole real life pregnancy restlessly waiting for this story to give birth!  Several months ago CDL predicted the culprit in this story was Detective Mark Harding (Chris McKenna) as there are too many “coincidences” with this guy.

Harding has a love/hate relationship with Scooby Gang leader Kevin Fisher (Greg Rikaart) – they have never gotten along. Harding never fully trusts Kevin because of his criminal past. Harding did not like Courtney (Kelli Gross), Noah’s (Robert Adamson) fiancee either since he did not respect female rookie cops but he put up with her, or so it appeared. Harding is very protective of Chief Williams (Doug Davidson) – he has that attitude that show that he does not want anyone around Chief Williams and he does it in a pitbull-obsessed kind of way.

There are a few things we know about Harding , he is Lead Detective at GCPD – he likes women because we saw him on a date at The Underground with a model type young lady. At that time he ran into Courtney and Noah and made a few off the cuff comments to Courtney – then the encounter was over. Harding ran into Abby Newman (Melissa Ordway) at the Athletic Club Bar giving her “love”advice after her break-up with fiance Tyler (Redaric Williams) (Whatever happened to Tyler?) telling her she has never felt love leaving Abby upset.

We know that Harding has a pet bunny rabbit who gave birth last winter. Harding had his nemesis man/boy sleuth Kevin babysit while Harding left for vacation. New Year’s Eve last year Harding was at a NYE party and ended up kissing Abby Newman even though they both never got along. Harding has a problem with “privileged rich people.”

Where are all of these odd features going with Harding? Does Chuck Pratt Jr. even know how disorganized and ridiculous this all looks? Let’s hope there is a method to this madness because if not Pratt is doing a great job driving Y&R into the ground the way Ron Carlivati’s awful Fluke storyline and endless Jason reveal are with General Hospital.

If Harding is the “Cabin Killer” he could very well be working with Marco Anicelli (Peter Bergman) and Victor Newman (Eric Braeden) this would be the best case scenario because it would actually make sense for once!

Could Harding be helping Anicelli? Let’s look at the timeline of when the “mystery” started on Valentines Day. Austin’s (Matthew Atkinson) body was moved and never properly identified by a hysterical Summer (Hunter King) – so let’s just assume Austin is not dead and someone helped Austin hide out and set up the privileged Scooby Gang brats for his murder.

Courtney saw footage at the GCPD that incriminated a GC power player: either Marco, Det Harding and or Victor but before she could tell anyone SOMEONE who had access to the police department after hours killed her… the only people with access that we know of are Harding, Williams and Scooby ringleader Kevin.

Harding could have easily been the person working with Victor Newman during the “confessional” mystery which would link Harding to Marco because at that time Victor had brought Marco into the fold. Victor had recieved “fingerprints” for his devious purposes but who got him those fingerprint documents? Someone who has access to that kind of thing at the GCPD… Harding again.

Someone tried to set Sharon (Sharon Case) up with a crow bar and fingerprints linking her to the death of Austin and Courtney – Harding? Victor could very well be at the root of it all as he certainly was with Marco but as always happens, the mad scientist lost control of his monsters.

When Nikki (Melody Thomas Scott) and Neil (Kristoff St.John) were booked at the GCPD for running over Christine (Laura Lee Bell) there was no Harding in sight – was he busy following the Scooby Gang or running Victor’s errands? Harding has been MIA for most of the year while Williams has been basically working alone but with his recent “mishap” – yes I’m saying mishap – because was Paul Williams’s mild heart attack natural or did someone put something in his coffee cup causing a simulation of a heart attack thus getting him out of the GCPD office leaving Det Harding in charge of the Marco Anicelli mystery? If Harding and Anicelli are working together that would work out nicely for Marco.

On the August 5 Y&R episode the show ends with a wounded Marco talking on the phone to someone “It is me, things did not go exactly like I planned and I am going to need your help again.” If we are to believe it is Harding it would all make sense.

On the August 6 Y&R episode Harding tells Noah that Marisa (Sophia Pernas) is part of why Courtney is dead and that she was there when the boat blew up with several people dying – he told Noah Marisa lied about the police sketch of what Marco looked like, that she drew a pic of the boat captain who perished because of her… Noah is shocked and agrees to help him. Is Harding setting Marisa up to help Marco get his revenge? With Harding running the cop shop alone he has full reign over everything, he has all of the inside info on witnesses etc. which is a great help for his partner in crime Marco Anicelli.

Kevin does not trust Harding and tells Paul “I THINK YOUR NUMBER ONE DETECTIVE IS UP TO SOMETHING AND IF I WERE YOU I WOULD NOT TRUST HIM SO MUCH!” Paul tells him you need to listen to Harding. Kevin is taking matters into his own hands he will be wathing Harding closely putting himself and Scooby girlfriend Mariah (Camryn Grimes) in danger.

Christine went to Harding asking him not to update Paul on anything and saying that Harding is in control. Looks like Christine just left the Fox in charge of the chicken coop. All of the little details of the Cabin Killer. like targeting Fen Baldwin (Max Ehrich), finding his weak spot with the bad college grades and blackmailing him to spike the Scooby gang’s punch that started whole fiasco – all of that is Detective work the public does not have access to – the fingerprints, the fake Kelly Andrews (Cady McClain) Morgue pictures for Victor. In the end we are going to find out that Marco was not running the show but Detective Mark Harding is.

On the August 7 episode Kevin & Mariah walk in on Harding he is on phone, the door is open to Harding’s office and Kevin continues to listen. Harding is talking to someone and says, “I know the place, the same place we always meet.” Of course this is open to speculation but is Harding going on another date or is he meeting up with Marco or Victor? Harding is playing both sides – he thinks he is smarter than all of them, time will tell.