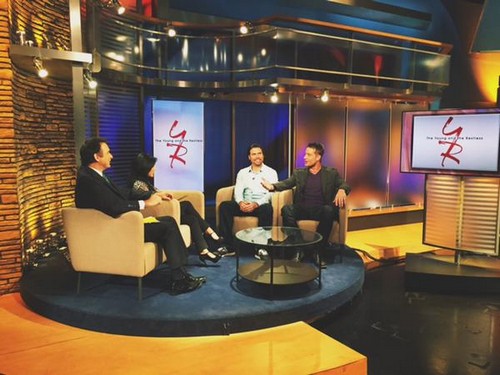 “The Young and the Restless” spoilers tease that the episode of the CBS soap airing on Tuesday February 10 will be another exciting one packed full of more Genoa City drama. Y&R spoilers tease that Billy Abbott is not a fan of Adam Newman’s alter-ego Gabriel, and on Tuesday’s episode he continues to feel threatened by the new guy in town and is beginning to realize that he could be a serious threat to his relationship with Chelsea.

“The Young and the Restless” spoilers reveal that on Tuesday’s episode of the CBS soap Y&R fans can expect to see Billy Abbott (Burgess Jenkins) and Gabriel bicker over their new living arrangements, and Billy is not pleased that Chelsea (Melissa Claire Egan) picked out his furniture for him. Meanwhile, Chelsea heads to Adam’s apartment to help Gabriel set up his new furniture and he opens up to her about his complicated marriage to Sage – and explains to her that they have not been happy since they eloped. When Chelsea gets back home to Billy she is crying – her meeting with Gabriel sparked deep emotions of the past and her marriage to Adam….

According to “The Young and the Restless,” spoilers, on Tuesday’s episode of Y&R all hell will break loose when Dylan and Joe Clark have another run-in. Dylan (Steve Burton) is not happy about Joe tricking Avery in to coming to his hotel room, and the two men come to blows before Dylan storms out. Ironically, Dylan meets up with Sharon to vent to her about his relationship woes, and Avery winds up tending to Joe’s injuries and coddling him. Rumors have been floating around for a few weeks that the writers might be planning on pairing up Sharon and Dylan – and it is beginning to look like that is definitely a possibility.

In other “The Young and the Restless” news, spoilers reveal that Y&R fans can expect to see Summer and Austin have a major blow up after Nick (Josh Morrow) learns that he screwed up at the Underground and didn’t give him messages about the crumbling foundation and dangerous state that bar is in. Also, it looks like Austin could have a few secrets of his own, after he quits his job he begins sending suspicious text messages to an unknown number.

So Y&R fans, do you think that Gabriel will be able to romance Chelsea without revealing his true identity? How do you feel about Dylan and Sharon (Sharon Case)? Is Avery still in love with Joe Clark? What is Summer’s hubby Austin up to? Let us know what you think in the comments below and don’t forget to check CDL tomorrow for more “The Young and the Restless” spoilers and news.