‘The Young and the Restless’ Spoilers: Jack Exposes Gabe as Adam Newman, Marisa Fights For Her Life, Sharon Off Meds 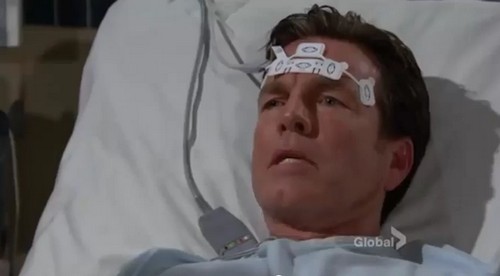 “The Young and the Restless” spoilers for Tuesday, June 30, tease that Marisa (Sofia Pernas) will hold Marco (Peter Bergman) at gunpoint. Marco will tell Marisa to go ahead and pull the trigger; he’s not turning himself in. Marco will manage to get the gun from her and they’ll argue about Jack (Peter Bergman) getting shot. Marisa will blame Marco, but he’ll suggest that Victor (Eric Braeden) is just getting what he wants at any cost as usual. Marco will force Marisa to go with him in a car and she’ll realize that he’s going to kill her. Marisa will grab the wheel and they’ll veer off the road.

At the hospital, Kyle (Lachlan Buchanan), Ashley (Eileen Davidson) and Billy (Burgess Jenkins) will remain hopeful that Jack will recover. When Ashley mentions Jack’s possible enemies, Summer (Hunter King) will think she’s hinting that Victor is responsible. Meanwhile, Nikki (Melody Thomas Scott) will call Neil (Kristoff St. John) and give him updates on Jack’s condition. Nikki will visit Jack’s room and insist that he has to pull through this. Gabriel (Justin Hartley) will listen as Nikki says Jack can’t let her husband be a murderer.

Other “Young and the Restless” spoilers indicate that Phyllis (Gina Tognoni) will ask Victoria (Amelia Heinle) if Victor shot Jack. Victoria will claim she doesn’t know who tried to kill Jack, but Phyllis won’t buy it. After Phyllis leaves in a huff, Victor will thank Victoria for her loyalty. Victoria will reply that she lied to protect Victor, but he still needs to tell Paul (Doug Davidson) what really happened. Gabriel will arrive and Victoria will depart to see how Billy’s doing. Gabe will say that Nikki knows the truth about the shooting and she could turn Victor in. Victor will declare that it was self-defense and he’ll tell Gabriel to leave.

Sharon (Sharon Case) will throw away her pills and have a chat with Mariah (Camryn Grimes) about her excitement over the new baby. At Crimson Lights, Dylan (Steve Burton) will view the surveillance footage from the park with Noah (Robert Adamson) and Kevin (Greg Rikaart). They’ll comment on how Jack walks by and then walks by again four minutes later. It’ll seem suspicious that Jack could move through the park so fast, especially with the timing of the gunshot.

Phyllis will show up at the hospital and accuse Nikki of covering up Victor’s crime. Neil will appear and Phyllis will imply that Nikki has covered for him recently, too. Paul will want to see Jack’s contact list, but Phyllis will think Victor is really the only suspect. When Victor walks in, Billy will say that he isn’t welcome there unless he’s going to admit he shot Jack. Nikki will speak with Neil in private and she’ll give him the news that Victor is indeed responsible. Neil will encourage her to come clean to Paul, which she’ll do a short time later.

Phyllis will look through Jack’s belongings and realize there’s no wedding ring. Meanwhile, Summer will comfort Kyle, who will hope that Jack will be the dad he used to be. The rumors say Jack will wake up soon and there’s bound to be big trouble. A preview video for Wednesday shows Jack announcing that Gabriel has been lying and he’s actually Adam Newman. Chelsea (Melissa Claire Egan) will look on in shock. There’s a good possibility Adam is dreaming. We all know how soap writers love a good fake-out. Still, it should be an exciting moment for Y&R viewers. Stick with the CBS soap to watch Adam sweat it out. Voice your opinion in the comments below and don’t forget to check CDL tomorrow for the latest “Young and the Restless” spoilers, rumors, updates and news.

Watch The Young and the Restless video sneak peek preview for Wednesday July 1, 2015 below!