‘The Young and the Restless’ Spoilers: Paul Wants Gabe’s Prints, Could They Match Adam’s – Nikki Snitches on Victor 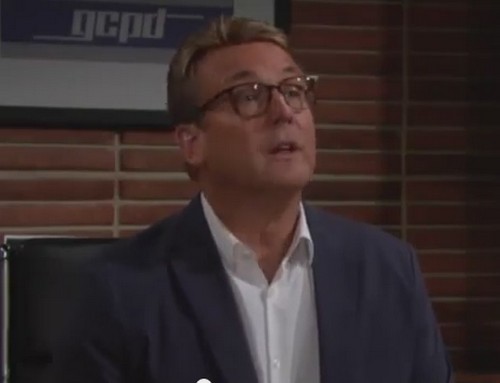 “The Young and the Restless” spoilers for Monday, July 20, tease that Paul (Doug Davidson) will give Victor (Eric Braeden) updates on the gun found in Chelsea’s (Melissa Claire Egan) penthouse. Nikki (Melody Thomas Scott) will believe that means Victor is off the hook. Paul will contend that he still has some questions about what happened. Michael (Christian LeBlanc) will show up and leave the room with Paul. While they’re gone, Nikki will apologize to Victor for doubting him. Paul and Michael will return with the news that Victor got bail.

Chelsea and Adam (Justin Hartley) will bicker about the gun. Adam will say he doesn’t know how it got there, but Chelsea won’t be sure she can believe him. Adam will remind Chelsea that it’s their anniversary and they’ll think back on happier times. Chelsea will confess that she still loves Adam, but things just aren’t the same now.

Adam will go back into Gabriel mode and head to the police station with Chelsea. Victor and Nikki will be leaving when they get there. Naturally, things will get heated. Paul will summon Gabriel and Chelsea into his office. Gabe will maintain his innocence and Paul will bring up the fact that there’s a partial fingerprint on the gun. If Gabriel will give his fingerprints, they can sort this mess out. Gabe will insist that he’s being framed and Victor probably put his prints on the gun. Back at home, Chelsea will worry about the possibility that Gabriel will be forced to give his fingerprints to the police. Adam’s prints are on file and the match could prove the truth. Chelsea will imply that she can’t live her life just waiting for the secret to get out.

Stitch (Sean Carrigan) and Ashley (Eileen Davidson) will be shocked to learn that Abby (Melissa Ordway) has been in a car accident. The executive Abby was with will say she got frisky and made him lose control at the wheel. Abby will brag about getting the contract signed and Ashley will suggest that drunken friskiness wasn’t the way to do it. When Ashley exits, Abby will hint to Stitch that it didn’t happen like Ashley said it did. Later, Ashley will tell Stitch she’s sorry she acted like Abby was looking to cheat. Stitch will admit that it’s Ashley he can’t get off his mind. Y&R rumors indicate that an affair is coming up. Stay tuned to “The Young and the Restless” to see if it’ll be a brief fling or something more.

Meanwhile, Avery (Jessica Collins) will start her goodbye tour. Phyllis (Gina Tognoni), Michael and Nick (Joshua Morrow) will all be on the list. Michael will encourage Avery to take time to heal. Avery will chat with Nick about how he’s moving on with Sage (Kelly Sullivan) and Dylan (Steve Burton) is moving on with Sharon (Sharon Case). It’s time for Avery to move on, too. Avery will soon be leaving Genoa City.

Neil (Kristoff St. John) will tell Nikki that he still doesn’t trust Victor. After some debate, Nikki will recall the fingerprint file she found a few months back. Nikki will realize that Victor has been playing her and she’ll decide to tell Paul everything. Victoria (Amelia Heinle) will warn her not to, but Nikki will insist she can’t let this go. Neil will be proud that Nikki is standing up for what’s right. Could this mess up Victor’s grand plan? Stick with the CBS soap to see if Victor can save his scheme.