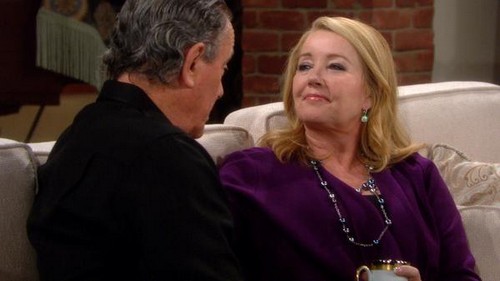 “The Young and the Restless” spoilers for the week of February 2 – 6 tease some exciting episodes for Y&R fans and you will not want to miss a second of all of the drama on the CBS soap. Victor Newman recently shocked everyone by showing a little mercy and agreeing to sell Chancellor to Jill Abbott – and giving her more time to come up with the rest of the money. However, according to Y&R spoilers, Victor is not going to make it easy for her and he and Jill (Jess Walton) will continue to feud during the week of February 2. Meanwhile, Jill’s scheming boyfriend, Colin (Tristan Rogers), continues to blackmail Devon in an attempt to get the rest of the money for the sale.

“The Young and the Restless” spoilers tease that during the week of February 2 Kelly (Cady McClain) will make her move on Jack, and is determined to win back her old flame. Phyllis isn’t exactly in a position to stop her. The Y&R spoilers in the latest edition of Soap Opera Digest reveal that while Kelly is working her charm on Jack, Phyllis (Gina Tognoni) is being committed to a mental hospital! Who is to say that Phyllis really cares if Jack gets back together with Kelly? Spoilers tease that she is livid with Jack (Peter Bergman) – and thinks he set her up to get her out of the way because she ruined his life by coming home.

In other “The Young and the Restless” news, spoilers for the week of February 2 tease that Y&R fans can expect to see Neil head to his eye doctor’s office and receive some shocking news regarding his blindness. Meanwhile, Devon snaps under the pressure of Colin’s blackmail and does something that completely shocks his step-mom Hilary. If Devon doesn’t confess to Neil about his affair with Hilary, his sister Lily might beat him to it. Cane has kept Devon’s secret, but his wife knows that something is up – and she is determined to find out what it is.

So Y&R fans, do you think that Jill and her family will get Chancellor back or is Victor (Eric Braeden) just teasing them? Did Kelly set Phyllis up and frame her for poisoning her, or is Phyllis really that crazy? Do you think that Jack will cave in to Kelly’s advances while Phyllis is away? Is this the week that Neil finally learns the truth about Devon and Hilary? Let us know what you think in the comments below and don’t forget to check CDL tomorrow for more “The Young and the Restless” spoilers and news.