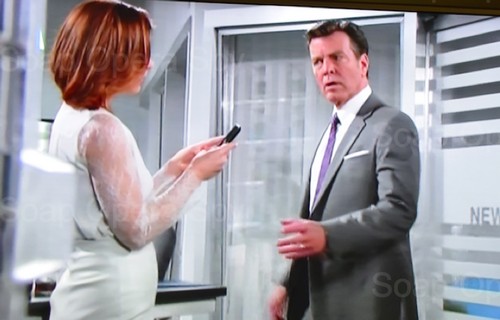 “The Young and the Restless” spoilers for Monday, June 15, tease that Phyllis (Gina Tognoni) will be suspicious of a tense conversation between Victor (Eric Braeden) and Jack’s (Peter Bergman) doppelganger. Fake Jack and Victor will try to act like they’re just concerned about Ashley’s (Eileen Davidson) health. Everyone will be surprised when Ashley shows up to work, but she’ll say that she intends on taking it easy. Ashley will speak to fake Jack alone and he’ll fill her in on his plan to bring down Victor.

Ashley won’t like the idea of taking such a huge gamble. They could all go to prison if someone finds out they’re setting up Victor for embezzlement. Ashley will think that the rest of the Abbotts are taking a big risk, but fake Jack will be in the clear. Fake Jack will say he has to be a step removed from the situation for this plan to work. Phyllis will see Ashley leaving in a huff and ask fake Jack about it. Fake Jack will say it’s a misunderstanding about her returning to work too quickly, but Phyllis won’t buy it. When he leaves, Phyllis will check fake Jack’s phone and see a text message.

Other “Young and the Restless” spoilers reveal that Billy (Burgess Jenkins) and Victoria (Amelia Heinle) will have a flirty chat. Billy will agree to keep an eye on Jack and the Abbott clan. Likewise, Victoria will keep watch over Victor. Later, Victoria will let Victor know that she thinks something’s up and she’ll say Billy agreed to keep tabs on Jack’s actions.

Summer (Hunter King) will also pressure Kyle (Lachlan Buchanan) to come clean about the Abbotts’ scheme. Kyle will brush off her suspicions, but Summer will persist. Kyle will say that he loves her and he thinks Summer loves him, too. Eventually, Kyle will decide to let Summer know that the merger isn’t everything is appears to be. Summer will keep pressing him, but Kyle will plead with her to drop the issue. A short time later, Summer will rush to tell Victor there’s something he should know.

Sage (Kelly Sullivan) will mull over moving in with Nick (Joshua Morrow). Sage will be concerned about how Faith (Aly Lind) will feel about it, but Nick will assure her that his daughter is warming up to her. They’ll let Sharon (Sharon Case) and Dylan (Steve Burton) know about their decision to share a place together. Sharon will congratulate them and hint that she’ll talk to Faith about accepting the new situation. Nick will say he’s proud of Sharon and that he thinks Dylan is a good match for her. Sage and Nick will give Victor updates on their decision. Victor will say that his grandchild comes first, but Victor obviously won’t be pleased with the news that Sage has Nick wrapped around her little finger. Later, Dylan will admit that coming home to Sharon feels right and he wants to move in with her if she’ll have him. Dylan will bring his stuff over and they’ll kiss passionately.

Ashley will discuss fake Jack’s plan with Billy and remind him that Victoria will never forgive him for his part in it. Billy will think things will be OK and say he’s willing to take the risk. Ashley will indicate that she knows their father wouldn’t approve of this, but she’s on board. Back at the office, Phyllis will show fake Jack a text message that says there’s “confirmation M was with him and they’re both dead.” Phyllis will demand answers. Y&R rumors say that fake Jack’s storyline could take an interesting turn. Stick with “The Young and the Restless” to see how fake Jack will try to cover his tracks.

So Y&R fans, what do you think about Phyllis’ suspicions? Will Phyllis figure out the truth? Is it a good idea for Nick and Sage to move in together? What about Dylan and Sharon? Will Summer reveal what she’s learned to Victor? Let us know what you think in the comments below and don’t forget to check CDL tomorrow for the latest “Young and the Restless” spoilers, rumors, updates and news.