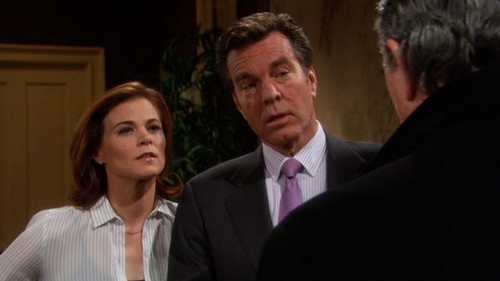 “The Young and the Restless” spoilers for Tuesday, March 24, hint that Genoa City will be full of surprises. Christine (Laralee Bell) will tell Paul (Doug Davidson) that even though Neil (Kristoff St. John) has confessed, there will still be problems. Christine will say if Victor (Eric Braeden) and Nikki (Melody Thomas Scott) have their way, the case will be thrown out. Meanwhile, Neil will be adamant about taking responsibility for his actions. Nikki will think that Neil’s making a mistake, but Victor will agree that he’s doing the right thing.

Paul will apologize to Nikki for thinking she ran down Christine on purpose. Christine will furious that Paul would apologize. After all, Nikki covered up for the man who killed their baby. Christine will say that she wants to charge Nikki with obstruction of justice and Victor will reply that he won’t allow a witch hunt. Victor may not have a say in the matter. Christine will say she intends on going after both Nikki and Neil through a civil suit.

Devon (Bryton James) and Lily (Christel Khalil) talk about how Neil is out on bail. Hilary (Mishael Morgan) will overhear and come over to offer her two cents. Hilary will say that you can never trust a drunk, but Devon will tell her that she set out to ruin Neil’s life and succeeded. Devon will wonder why Hilary even cares and he’ll ask her if it’s about money. Hilary will imply that it wouldn’t matter even if she way. The point is she wants Neil to get out of his predicament just as much as Devon.

In Michael’s (Christian LeBlanc) office, Lauren (Tracy E. Bregman) will be surprised to see Cane (Daniel Goddard). Cane will tell Lauren that things have been tense at home. Lauren will say that Cane just has to take baby steps. The conversation will turn to how Cane coped when Lily had cancer. Cane will say that providing love and support is all you can do. Michael will show up and say that it looks like the saddest party ever. Lauren will excuse herself and Cane will want to know if his contract has locked him into the number two position at Chancellor. Michael will ask Cane if he wants to go around Jill (Jess Walton) and take the company for himself. Cane will say that he was railroaded into the number two spot and he doesn’t think Jill can run both Chancellor and Fenmore’s.

Michael will remind Cane that Jill is his sister-in-law and suggest that Jill cut back at Fenmore’s. Cane will respond that Jill would never do it because of Michael’s disease. Michael will snap at Cane, but he’ll eventually apologize and agree to take a look at Cane’s contract. Lauren will return and start flirting, but Michael will tell her that he can’t pretend anymore. Later, Cane will ask Lily if he can move back into the bedroom and she’ll agree.

Other “Young and the Restless” spoilers for Tuesday, March 24, tease that Phyllis (Gina Tognoni) will be worried about what Victor’s up to. Phyllis will also tell Jack (Peter Bergman) that she’s concerned about what Kelly (Cady McClain) might have in mind. Jack will reassure her, but Phyllis will still think they should stay on guard. A little later, John (Jerry Douglas) will appear and tell Jack that he hates to see him like this. John will say that Jack’s being too tough on himself. Jack will say that everything is his fault and he’ll be to blame if Kelly ends up dead.

Phyllis will pay Victor a visit to get updates on why he wants to buy Jabot. Victor will reply that it’s simply about profit. Phyllis will say taking the company away from Jack would go against John’s wishes. Victor will say he had no problem with John and suggest that he was 10 times the man Jack is. Phyllis will wonder why the man who saved Jack’s life is now trying to take it away. Victor will give Phyllis the news that Kelly is dead from an apparent suicide. Phyllis will demand proof and Victor will give her an envelope. When she returns home, she’ll show Jack the envelope and pull out a photo of Kelly’s body from the coroner’s office. When Victor is alone with Nikki, she’ll ask what he has up his sleeve. Victor will tell her that one day Jack will need his help and he’ll give it to him in exchange for everything he owns.

At the police station, Neil will tell Christine he’s sorry about what happened and that he wants to come forward with the truth to give her closure. Christine won’t listen to Neil’s excuses and she’ll say she’ll never forgive him. Hilary will see Neil outside and hint that there might be a way get the case against him thrown out. Neil will think Hilary’s just worried about the divorce settlement and he’ll say she doesn’t deserve anything. The district attorney, Winston Mobley (Ryan Caltagirone), will tell Christine that it should be easy to convict Neil since he confessed. Christine will say she wants the maximum penalty. Paul will suggest that maybe taking one life was enough. Christine will be angry that Paul isn’t more upset about the loss of their child. Paul will say he’s just as distraught. Christine will tell Paul that there were complications and she won’t be able to have more children. Paul will grab Christine and hold her as they sob.

Lily will see Neil at the athletic club and let him know they found him the perfect lawyer. Leslie (Angell Conwell) will appear and say she took a leave so she could take this case. Leslie will hope that they can all put the past behind them. Neil will say he can handle things for himself, but Leslie will warn him that the maximum sentence is 25 years. Leslie will say that’s a lot of time to serve for an unfortunate accident. Devon will urge Neil to think of Moses (Randall L. Smith). Neil will agree to let Leslie represent him, but not for Devon. Devon won’t care as long as Neil lets Leslie help him. Later at the bar, Hilary will run into Winston and offer to buy him a cup of coffee. Y&R rumors say Hilary will try to get Neil off the hook so stick with the CBS soap to see if her plan will succeed.