The Young and the Restless Spoilers: Will General Hospital Lose Billy Miller to Y&R – Is Burgess Jenkins Out as Billy Abbott?

BY Heather Hughes on May 30, 2015 | Comments: 28 comments
Related : General Hospital, Soap Opera, Spoiler, Television, The Young and the Restless 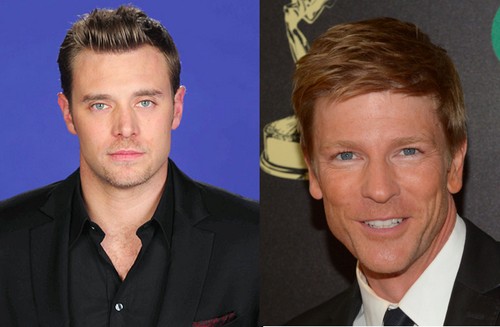 “The Young and the Restless” spoilers hint that fans could soon see a familiar face from “General Hospital” back on Y&R, Billy Miller! According to Daytime Confidential, multiple sources have confirmed that “The Young and the Restless” would love for Billy Miller to reprise his role as Billy Abbott and Y&R is definitely interested in getting him back – away from “General Hospital!” Most soap viewers know that Billy Miller is now playing Jason Morgan on “General Hospital.” Miller has been involved in one of the show’s central storylines over the last few months. If GH loses Miller, it would be a major blow.

On the other hand, one soap’s loss is another soap’s gain. Many Y&R fans would enjoy seeing Miller back in the role of Billy Abbott. Miller’s absence has undoubtedly been felt since his departure. “The Young and the Restless” was able to accomplish a successful recast of Adam Newman when Justin Hartley took over for Michael Muhney. However, Burgess Jenkins’ portrayal of Billy hasn’t garnered as much praise. The problem doesn’t seem to lie in Jenkins’ acting ability. Instead, it appears to be a matter of fitting into the role. While Miller had a certain edge that made Billy’s troubled past believable, Jenkins has a different look and feel that may be too soft and straight for the Billy we had all come to know. Naturally, the goal isn’t to mimic the previous actor’s style, but it can be jarring if an actor is completely on the opposite end of the spectrum.

Recasts are a necessary evil on soaps, but it’s rare that you strike gold with someone like Hartley. That’s why it’s always nice when a fan favorite can come back home. It’s worth noting that Billy Miller’s contract with “General Hospital” is up at the end of October 2015. If “The Young and the Restless” wants him, they should snatch him up fast. The rumors say we could see a bidding war go down between GH and Y&R. It would likely be a negotiation battle that neither side would want to lose. Stick with CDL for updates on the possibility of Billy Miller returning to “The Young and the Restless.”

What do you think about the news that Y&R could get Billy Miller back as Billy Abbott? Would that be a good move? Would it be a devastating loss for GH? Let us know what you think in the comments below and don’t forget to check CDL tomorrow for the latest “Young and the Restless” spoilers, rumors, updates and news.