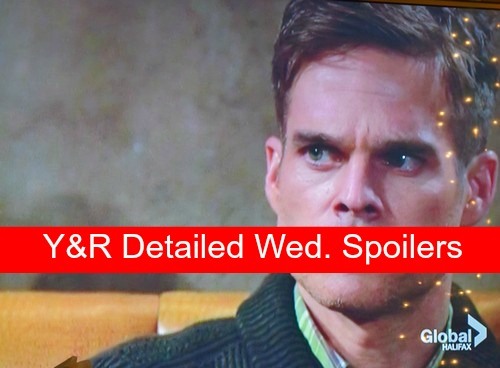 “The Young and the Restless” spoilers for Wednesday, December 9, tease that Adam (Justin Hartley) will do his best to get Jack (Peter Bergman) on board with the plan. Sacrificing Billy (Burgess Jenkins) seems to be the only way out of this dilemma.

If Jack doesn’t throw Billy under the bus, they could all be destroyed. However, Jack will still want to reason with Victor (Eric Braeden). Though Jack is furious with Billy right now, he doesn’t think he can just toss him aside.

Once Jack is gone, Chelsea (Melissa Claire Egan) will question Adam’s idea to blame everything on Billy. Does Adam really hate Billy so much that he would turn his brother against him? Adam will contend that it’s nothing personal. Besides, this might give Billy the opportunity he needs to reconnect with his family. Chelsea will understand what Adam is trying to do and she’ll give him a kiss.

Meanwhile, Ashley (Eileen Davidson) will want to make a deal with Victor. Unfortunately, things won’t go very well. Victor will say it’s going to take $500 million to make all of this go away. That’s not good news for Jabot. Ashley will give Jack and Billy updates on Victor’s offer.

Billy will say they can’t afford that, but Ashley will fear that going to court will cost them much more.

Billy will insist that they have to keep fighting Victor, but Jack will decide to go talk some sense into him instead. Of course, Victor won’t be interested in Jack’s point of view. They’ll bicker about the ordeal with Marco (Peter Bergman) and Jack will threaten to tell the judge everything.

Victor will remind Jack that he killed Kelly (Cady McClain) and blew up the cargo ship. All of that could come out. Jack will declare that he’s willing to let it happen it if means protecting his family. Victor will believe he’s bluffing, but Jack won’t back down.

It appears negotiations are over and this war is officially beginning. Y&R fans should be prepared to watch the action heat up.

Kevin (Greg Rikaart) will tell Mariah (Camryn Grimes) what he’s been working on with the female hacker from Switzerland. They’ve developed a way to make computers completely private. In other words, they can be hack-proof.

Billy will overhear and fill Kevin in on his failed plot. Kevin will be concerned about his involvement getting back to Victor. Billy will hint that maybe Kevin can solve this problem.

Other “Young and the Restless” spoilers say Noah (Robert Adamson) will realize that Luca (Miles Gaston Villanueva) has been lying to Marisa (Sofia Pernas). After getting the details from Kevin, Noah will call Marisa to tell her about the deception.

Luca said Ava was living under harsh conditions, but she’s actually been going to a very exclusive school where celebs send their kids.

Marisa will confront Luca and he’ll admit that he’s been paying Ava’s tuition. Luca provides for Ava and she’s living with a good family. Marisa will be outraged by the lies, but Luca will suggest that he wanted to chance to come together with his ex.

Back in Genoa City, Noah will clash with Victor over his deal with the Santori family. It’s clear that Victor wants to break up Noah and Marisa. Later, Noah will use some additional info he learned from Kevin. He’ll make a phone call to report a federal crime.

Noah will say someone is dealing arms in Wisconsin and he’s confident agents will be able to find him. It looks like Noah has a new plan. Will Noah’s efforts succeed? Stick with the CBS soap to see if Noah can pull off his scheme.