The Young and the Restless (Y&R) Spoilers: Break-Ups and Make-Ups – Sully’s Eyes Examined by Sage

BY Heather Hughes on December 17, 2015 | Comments: one comment
Related : Soap Opera, Spoiler, Television, The Young and the Restless 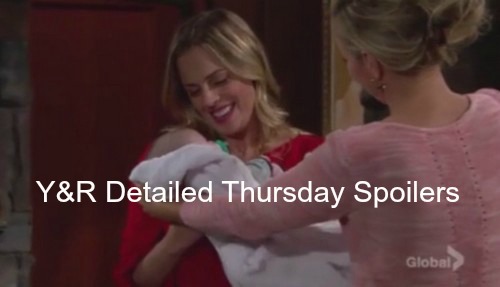 “The Young and the Restless” spoilers for Thursday, December 17, tease that Billy (Burgess Jenkins) will try to force Kevin (Greg Rikaart) to let him invest in his hack-proof computer project. Kevin won’t be interested, so Billy will threaten to give Victor (Eric Braeden) updates on Kevin’s part in the last Paragon attack. Kevin will insist that he worked hard to get this far and Billy should, too.

Billy’s life is a mess and it looks like it’s only going to get worse. Later, Chelsea (Melissa Claire Egan) will notice that Billy is drinking at the bar and placing bets over the phone. When Chelsea tries to talk to Billy about it, he’ll snap at her.

Elsewhere, Luca (Miles Gaston Villanueva) will ask Marisa (Sofia Pernas) to come work for him at Newman. He needs someone on his team that he can trust. Marisa won’t be sure that arrangement will work since Victor despises her. Luca will assure Marisa that it’ll be a good fit.

At Newman Enterprises, Adam (Justin Hartley) will let Victor know that working with the Santori family will lead to trouble. It would be best if Victor paid them off and cut ties. Victor will call Luca and set up a meeting.

Once Luca arrives, he’ll tell Victor he expects some office space and he wants Marisa to work as his assistant. Victor will hint that Luca won’t be needing either of those things and he’ll hand over a check. Luca will refuse to take the money.

The Santoris own part of the company now and Victor can’t just cut them out. Victor will call Luca’s father, but that will be a dead end as well. It appears the Newmans are stuck.

Meanwhile, an FBI agent will stop by The Underground. Noah (Robert Adamson) will suggest that the lead he provided didn’t have much substance after all. The agent will tell Noah to keep an eye out and report back if he hears any news.

Marisa will come in and inform Noah that she’s quitting her job. She’ll be working for Luca instead. Noah will gripe that Luca can’t be trusted, but Marisa will counter that Noah is the untrustworthy one. Marisa make it clear that her relationship with Noah is over.

Later, Marisa will sob in her suite as she thinks back on fond memories with Noah. Luca will show up and Marisa will tell him about her breakup. Luca will imply that he doesn’t want to pressure Marisa to be with him. He’ll say he just wants Marisa’s happiness.

Back at Newman Enterprises, Noah will arrive to tell Victor he stayed tight-lipped. Adam (Justin Hartley) will believe Noah would make a good liaison. Noah can work with Marisa and Luca. With any luck, they might be able to get rid of the Santori family. Noah will think he’d be perfect and Victor will bring him on board.

Other “Young and the Restless” spoilers reveal that Sage (Kelly Sullivan) will get some advice from Sharon (Sharon Case). When Sage comes over to pick up Faith (Alyvia Alyn Lind) for “The Nutcracker,” Sharon will say she’s at ballet class. Sharon will be surprised that Nick (Joshua Morrow) didn’t fill Sage in. Sage will confess that she hasn’t really been talking to Nick lately.

Sharon will ask about Sage’s plans moving forward. Sage will state that they might get a divorce. Sharon will urge Sage to really think it through before taking action. Sage will hold Sully and it will lift her spirits. After looking closely at his face, Sage will think Sully has his father’s eyes.

Nick will try to track down Sage at her penthouse, but Chelsea will say she went out. When Nick comes in for coffee, Chelsea will tell him how much better Sage seems now. Nick will be bothered by the fact that Sage can open up to everyone but him. Chelsea will admit that Adam suggested Sage move in across the hall, but it was a huge mistake.

Nick will mull over the way Adam constantly protects Sage. Talk will turn to Adam working at Newman Enterprises. Nick will point out that it’s easy to get sucked in. Victor can make his kids think that his approval means everything. Y&R viewers certainly know how controlling Victor can be.

In the park, Nick will find a chipper Sage singing. They’ll chat for minute and Sage will mention that having space can mean being lonely. Nick will pull Sage close for a hug. Will Nick and Sage finally move past their recent roadblock? Stick with the CBS soap to see if they can make it work.