The Young and the Restless (Y&R) Spoilers: Colin and Marco Paragon Project Partners – Is This Colin’s Final Crime? 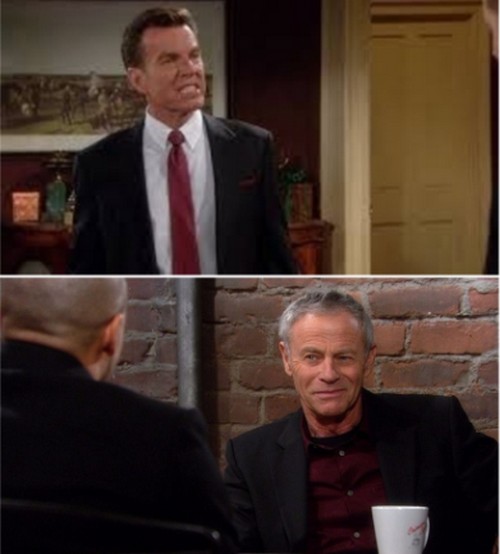 The Young and the Restless spoilers explore Colin’s involvement with the mysterious Paragon Project which caused Victor to bring Marco to Genoa City and wreck havoc on its unsuspecting residents. Is Colin (Tristan Rogers) the con man deviant who is in cahoots with evil drug lord Marco Anicelli (Peter Bergman)? Besides both being criminals they have both done prison time and who knows if they ended up cellies at one time or another? Colin Ashby would be the perfect partner in crime to Marco Anicelli.

Colin has done time in prison for tax evasion – suspicion of money laundering – drug trafficking – murder and attempted murder. Colin was deported and imprisoned in Barwick Prison, Australia. When Colin was released December 2013 the first place he headed was GC where the money was. Colin kidnapped Jill Abbott Fenmore (Jess Walton), held her hostage for a few weeks then tricked her into marrying him. He frees her but only from the handcuffs because now they are chained to each other in unholy matrimony.

Colin only came back to Jill for the cheap jewelry box Catherine (Jeanne Cooper) left Jill when she passed away. Supposedly the jewelery box was worth more than anyone thought – Colin wanted that pot of gold and at the time was willing to have his new bride knocked off when he got it. Colin continuously told Jill and his son Cane (Daniel Goddard) he has changed his conman ways. Eventually Colin genuinely fell for Jill and did not want her killed – they literally became partners and Jill proved to be no better than Colin when they both scammed an insurance company for eighteen million dollars proving that Colin is still the greedy con he has always been. The surprising part about that story was Jill’s part in the scam – she did not need the money and is always preaching to Colin about being honest.  We can chalk that up to poor writing… Jill would have never risked prison time to pull a scam with Colin.

Colin’s next con was a scam to steal the very expensive doll that was up for auction at the Delia Abbott (Sophie Pollonos) Fundraiser benefiting children who have been killed by drunk drivers. Colin was in cahoots with a dirtbag con who he owed lots of money to – so Colin continued to live the con life but this was supposedly his last scam. The heist was a bust Colin shot the dirtbag he was working with and was made out to be a hero.

He then got back in the good graces of his son Cane and wife Jill. Eventually Colin could not contain himself from his natural con man instincts when wifey Jill wanted to buy Chancellor Industries back but needed the funds. Colin came to the rescue as he saw an opportunity in blackmailing Devon (Bryton James) for millions and he took it. A leopard does not change his spots.

Colin latest job was for Neil (Kristoff St.John) to ruin Devon and Hilary’s (Misahel Morgan) wedding. Colin set Devon up by drugging him at his bachelor party and sending a hooker to his room while filming it all. Devon passed out BUT Colin got video of the hooker leaving Devon’s room and he handed it over to Neil and got paid a hefty sum. Neil did find out Colin was squeezing Devon for the big bucks too and told him to knock it off or it would ruin his plan! Now Neil is feeling less vindictive but who knows how long that will last.

Conning and crime are in both Colin’s and Marco Anicelli’s blood. Marco Anicelli is a druglord, killer conman who will stop at nothing to live the good life – both Colin and Marco have the same goals – they just go about things differently… or maybe not so different.

The latest scam, the one that brings Colin and Marco together, is the often spoken about Paragon Project that Victor Newman (Eric Braeden) believes was started to try and ruin him. This Project is what provoked Victor into bringing the devil Marco into GC in the first place to take over Jack Abbott’s (Peter Bergman) life since The Moustache believed Jack was behind the project. Colin came back to town Dec 2013, married Jill in Feb 2014 and has had his hands in blackmailing scams ever since but what else has Colin had his hands in?

This Marco-Colin unholy alliance is making even more sense considering Tristan Rogers has announced that he is leaving Y&R and heading back to General Hospital. Jill could easily find out about all of his dirty dealings including being behind the Paragon Project – she will kick him to the curb and cut off all money supply. His son will disown him again there will be no reason Colin would stay in town unless Marco adds Colin to the list of dead victims. What do you think CDL’ers could Colin and Marco be behind the Paragon Project together? The timeline adds up all the way to Tristan Rogers’ departure from The Young and the Restless. Please leave your thoughts and comments in the CDL comments below.