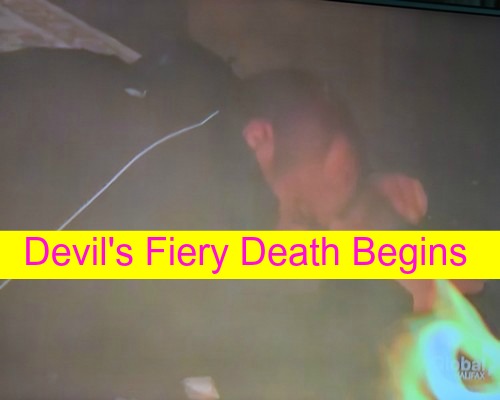 “The Young and the Restless” spoilers for Monday, November 2, tease that the flames will creep closer to the Halloween gala. Initially, the partygoers will be oblivious to the danger lurking nearby. Of course, the person in the devil costume certainly knows what’s up. He or she will observe the festivities and cause even more fiery death and trouble.

Cane (Daniel Goddard) will call Lily (Christel Khalil) to give her the news about Hilary (Mishael Morgan). Joe (Scott Elrod) will say something in the background and it’ll have Cane on edge. Lily will claim nothing is going on, but Cane will reply that he’ll be there soon.

Elsewhere, Kevin (Greg Rikaart) will try to get to the bottom of the broken elevator situation. Cane will arrive and Kevin will tell him that something’s terribly wrong. Cane will go upstairs to alert the guests, but the masked villain will knock him out in the stairwell.

Meanwhile, Paul (Doug Davidson) and Neil (Kristoff St. John) will try to jog Hilary’s memory. They’ll give Hilary updates on her accident and her marriage to Devon (Bryton James). Hilary will be shocked when she hears about the affair.

In the hall, Dylan (Steve Burton) will wonder why Hilary refuses to have anything to do with Devon. When Dylan asks if something happened between them on the island, Devon will insist that everything was fine. Devon will try to visit Hilary again, but she won’t be interested. Neil will be the only one Hilary wants by her side.

In Adam’s (Justin Hartley) room, Christine (Laralee Bell) will inform him that the warden at Walworth will be expecting him tonight. Michael (Christian LeBlanc) will gripe, but Christine will suggest that this needs to happen ASAP. Later, Christine will worry that Adam will try to escape. Adam will be handcuffed to the bed just in case.

Other “Young and the Restless” spoilers say Marisa (Sofia Pernas) will arrive at the gala with Luca (Miles Gaston Villanueva), but she’ll eventually sneak off with Noah (Robert Adamson). They’ll end up making love in an office.

Luca will scowl when he spots their hidden romance. Stitch (Sean Carrigan) will show up for the party, but he’ll notice some smoke before he heads upstairs. When Stitch opens the door to check it out, he’ll be blown back by an explosion.

Stitch will be knocked unconscious, but he’ll try to get the fire under control once he comes to. Unfortunately, the fire alarm and hose won’t be working. Stitch will finally manage to get himself up to Top of the Tower to warn everyone about the blaze. Y&R rumors hint that this event will have tragic consequences. Stick with the CBS soap to see all the tears and terror.