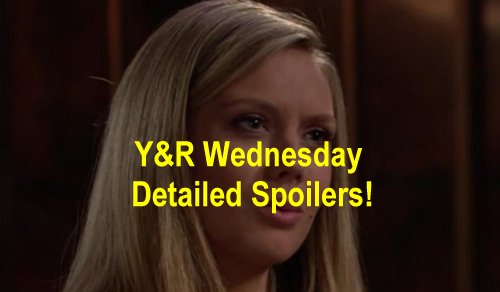 “The Young and the Restless” (Y&R) spoilers for Wednesday, December 2, tease that Victoria (Amelia Heinle) and Ashley (Eileen Davidson) will mull over what Billy (Burgess Jenkins) might be plotting with Phyllis (Gina Tognoni).

Victoria will do some digging and discover that Billy sent Jack (Peter Bergman) to Geneva just to get him out of the way. When Victoria confronts Billy about it, he’ll eventually confess that he wants to bring Victor (Eric Braeden) down.

Billy will suggest that it’ll give him some form of justice for Delia (Sophie Pollono). Victoria will make it clear that their relationship is over. Meanwhile, Ian (Ray Wise) will tell Victor to go ahead and kill Phyllis.

Whether Victor does it or not, the Paragon virus can’t be stopped. Victor will grab him, but Ian will swear that he really can’t do anything about it. A couple of federal agents will arrive to take Ian away. Victor will praise Phyllis for playing along.

At The Underground, Stitch (Sean Carrigan) will meet with a wedding planner named Nora (Candis Cayne). Since Abby (Melissa Ordway) will be running late, Nora will urge Stitch to pick out a venue on his own.

Stitch will finally agree on one and Nora will head out. When Abby finally shows up, Stitch will give her the news that he made a decision without her. By the bar, Sage (Kelly Sullivan) and Nick (Joshua Morrow) will bicker about what happened with Faith (Alyvia Alyn Lind).

When Sage steps out for air, Stitch and Abby will inquire about the trouble. Nick will admit that they’re having problems in their marriage. Nick will say maybe it’s for the best that Victor is essentially pushing him out at Newman Enterprises.

Abby will be shocked when she learns there’s a battle brewing. However, Abby won’t worry about getting caught in the middle of it. As long as she has Stitch, Abby will believe her future is bright.

Other “Young and the Restless” spoilers say Stitch will ask if Abby intends on quitting her job once they start a family. Abby will be annoyed with the suggestion and Stitch will drop the subject. They’ll pick up where they left off on wedding plans.

Sage will head to the park to clear her head. Adam (Justin Hartley), Chelsea (Melissa Clare Egan) and Connor (Gunner and Ryder Gadbois) will arrive for some family fun. Chelsea will leave Adam and Sage alone to talk.

Sage will give Adam updates on her harsh attitude with Faith and the argument she had with Nick. Adam will understand how Sage feels and he’ll urge her to fight for her relationship. Adam will remind Sage that Christian’s father is having a hard time, too.

As they chat, Adam will put his arm around Sage. Later, Nick and Sage will apologize to each other. Sage will vow to be more careful about what she says to Faith. They’ll share a hug as they put the conflict behind them.

At the penthouse, Adam will recall the things he said to Sage and wonder if he really helped her. Chelsea will ask if Adam is feeling guilty because he’s back home and happy with his family. Adam will remember how he felt after Chelsea’s miscarriage and they’ll embrace.

After Adam reflects on the paternity conversation with Victor, he’ll receive a call from him. Victor will insist that it’s time to focus on their battle with the Abbotts. Adam will tell Chelsea that she was right to worry.

Victor will make sure Adam fulfills his end of the bargain now that he’s free. Y&R viewers will be anxious to see how this war plays out. Stick with the CBS soap to see what Victor’s next move will be.