Thicker Than Water: The Tankards Recap Season 2 Premiere Episode 1 “Act Like a Sister” 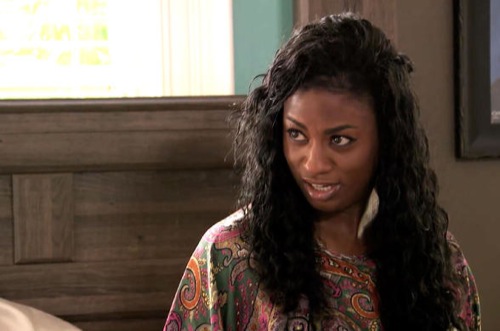 On the last episode, Benji and Shanira’s nuptials arrived in the season 1 finale. Here, Brooklyn made an unexpected speech, and sisterhood dramas threatened to sour the big event.

On tonight’s show as per the Bravo synopsis, “season 2 opens with the Tankard family gathering for a garden party to celebrate Cyrene’s high-school graduation, yet drama stirs when Jewel’s sister is a no-show and jealousy rises among the siblings. Also: Britney tries to help the Tankards shed pounds; and the gang heads to Baltimore.”

The show airs tonight at 9PM and you do not want to miss all the drama. While you wait for our recap let us know how excited you are for the new season of Thicker Than Water The Tankards.

Jewel tells Ben she needs his help getting ready for Cyrene’s graduation party. “So glad this is the last juvenile graduating,” Ben says.

Jewel is a little nervous about Cyrene going to college, saying she plans to hit up the campus at least once a month.  Jewel tells her daughter she is happy for her going to Howard, but would prefer she were closeby. Cyrene tells her that sometimes she treats her like she’s 11 and she needs to realize she is “womaning up.”

Benji, who is married, has been staying in his father’s house far too long and wants his own place so he can do whatever he wants.

Brooklyn says she doesn’t want to insult her father, but Cyrene is the only child who has gotten a graduation party because their father used to be more focused on his music career.

Junice isn’t coming to the graduation party, which upsets her sisters, who think she should have come and is taking things too far by skipping this, especially after moving, which she didn’t tell anyone about until after she did it.

Britney complains about the party because none of them got a party. She admits Cyrene was a ‘better child’ than she has been, and maybe this party is a way of thanking her for never making her parents pick her up from jail.  Marcus says that they, the other kids, are the background players to Cyrene.

Ben tells Cyrene that she is the result of him having had two failed marriages previously and having neglected parental responsibilities seeking a millionaire status.

Brittany brings over healthy food in an attempt to help everyone move over to a healthier lifestyle.

While everyone eats, Jewel says she hopes everyone comes out to the family reunion. Brooklyn is sick of the drama between the sisters, saying when she went to jail Junice was the one who supported her. Ben says he doesn’t side with any of the women and is on Team Jesus.

Benji says he can’t make it because he is going to be working on his career, which Ben approves of.

For the 4th of July trip, the family must split up. Ben, Jewel and Cyrene are taking a plane and the others have to drive.

When Ben, Jewel and Cyrene arrive at Junetta’s house, she tells them that they still don’t know if Junice is coming, which she is mad about.

Brooklyn is inspired by how Junetta has turned out after being a young mother.

Cyrene is still upset that Junice didn’t come to the graduation party, saying she tries to open up with her but nothing works.

Junetta says she has only been in that house for six weeks, so the party is also a housewarming party, and she hopes everyone can come out. Junice does end up coming, which makes Junetta happy but also makes her wonder what mood Junice is going to be in.

Junice says she is just here to “have a good time, put the mask on and keep it moving.” She says since moving to Texas it has been nice having space from the family, who she says gossips a lot and consistently makes her wonder if she’s been talked about.

Cyrene talks to Junice, telling her she is not over the fact that she wasn’t at her graduation, saying it kind of hurt. Junice says it’s not as if she was just sitting at home and she had responsibilities to attend to. She says if she could have physically been there, she would have. Cyrene says she just wishes things could be the way they were before. Junice continues talking about her responsibilities, saying that grad school is expensive and sometimes it isn’t feasible just to fly places for events. Cyrene feels that everything could have been okay had she said it was a financial issue from the beginning, but this is the first time she’s heard about it.

Brooklyn and others walk up to them, and Junice talks about feeling judged and ganged up on by other members of the family.

Everyone goes inside to talk about everything, and Jewel starts with a prayer. Junetta says that the way she did everything was “very devastating” to her, what with moving and not telling anyone about it. Cyrene also says it did come off as secretive. Junetta says she hurt everyone in the family, and Cyrene she needs to let her breathe and state her point-of-view.

Junice talks about being in a competitive grad program, and Junetta says she doesn’t want to hear about that as she isn’t the only one doing that. She then starts crying and calling her secretive, bringing up how her husband went to jail and she didn’t tell the family about it and that she is hearing about her water getting cut off while she acts as if everything is okay.

Britney starts crying, saying they all used to be so close but now it’s different. Cyrene storms off crying and Ben comforts her. He comes into the kitchen to talk to everyone else, and everyone calms down. They all pray.