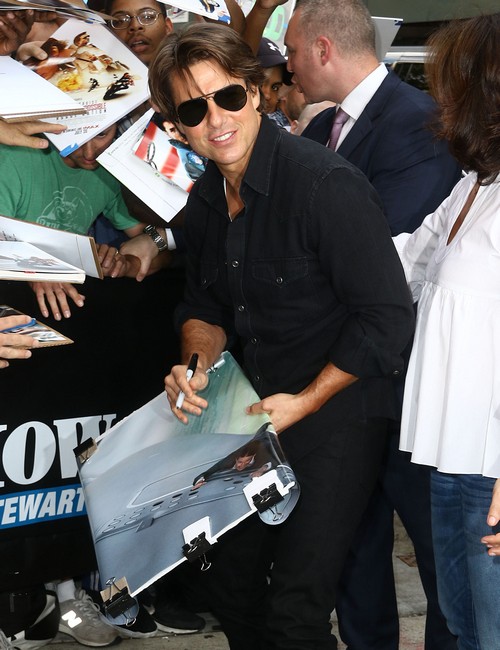 Tom Cruise’s stepfather John “Jack” South passed away on July 25 and neither Tom nor his mother Mary Lee showed up to visit as he suffered end-stage COPD, according to the National Enquirer. John South was married to Tom’s mom Mary Lee for 32 years. They wed in 1978 when Tom was 16 and John South took in Mary Lee and her kids – Tom and his sisters whom he grew close to over the years.

And, it turns out, Tom has Jack to thank for his gazillion dollar movie career. When Tom expressed an interest in acting as a profession after an appearance in a high school drama production, Jack loaned his stepson a chunk of money to get started chasing his dream in New York City. From there, it was history and Tom became a mega-star. But even after Tom found both fame and fortune, he was close to Jack.

The ugly truth all comes down to divorce and Scientology. Following in Tom Cruise’s footsteps, Mary Lee and sisters Lee Anne, Marian and Cass all became entrenched in the controversial church/cult and cut off ties with friends and family. But Jack South refused to join the new family religion and this was the beginning of the rift that would see Cruise and his sisters and mother ditching South in his final days.

Mary and John divorced five years ago, with John South filing divorce papers in 2010 after Mary Lee ditched him to immerse herself in her son’s life and religion, serving as nanny to Suri Cruise from birth until Tom Cruise’s divorce from Katie Holmes. John was a devout Catholic, as the Mapother clan (Tom’s birth name) once were as well.

Because John refused to join Scientology and that makes it very likely that Tom, Mary and Tom’s sisters would have treated him as an SP (Suppressive Person) and cut him out of their life. Rumor has it, when John South and Mary Lee traveled to LA to meet newborn Suri, Mary then sent John home to Marco Island, Florida without her. Mary never came back and cut off contact with all their friends.

Tom had once described step dad Jack in glowing terms, but Tom never showed up to see him when he was suffering from terminal COPD and he and Mary did not turn up for John South’s funeral. It’s a shame since they were so close that they traveled together with Cruise while he worked and, in fact, Cruise saved Jack’s life in 2003 when his step-dad had a renal failure incident.

But in 2006, when Tom was getting his first shot at biological fatherhood with Katie Holmes giving birth to Suri Cruise that Mary Lee went off the deep end with Scientology. While Tom and Mary were no-shows for Jack’s funeral, Tom’s sister Marian Henry and her son Cal put in an appearance. Tom was not at work while his step-dad was ailing, but was seen out partying.

The National Enquirer also speculated that the reason Mary Lee may have missed the funeral of her long-time husband was that she may have also passed away! Reportedly, Mary Lee has not been seen in public since April and, prior to that, in November, she moved from son Tom Cruise’s compound to an assisted living facility.

But since then, witnesses say Mary Lee’s apartment has been empty for weeks and neighbors fear the 78 year old Mary may have died. Alternately, Mary Lee may be tucked away in the Scientology Celebrity Centre. During her divorce with South, Mary listed her address as the Scientology HQ in Florida. And Shelly Miscavige, wife of Scientology head honcho David Miscavige, has not been seen in years – maybe the ladies are stuck in intense auditing sessions…