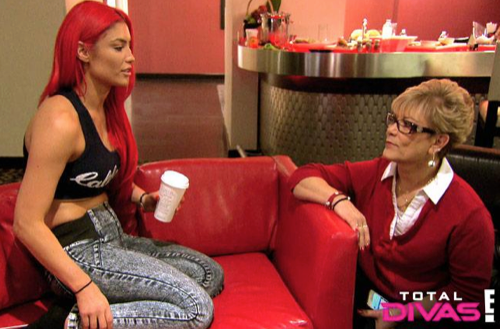 Tonight on E! the WWE’s Total Divas starring the Bella Twins and the rest of the Divas continues with an all new Sunday February 22, season 3 episode 17 called, “Mo’ Money, Mo’ Purses,” and we have your weekly recap below. On tonight’s episode, Nattie renovates her mom’s house; Brie tries to help with Nicole’s out-of-control spending habits.

On the last episode Brie and Paige took the U.K. by storm, but Brie’s wild behavior made Nikki worry that their performance in the ring may suffer. Meanwhile, Nattie was forced to ask TJ for help dealing with a family disaster; and Alicia fell apart when confronted with her ex-boyfriend. Did you watch the last episode? If you missed it, we have a full and detailed recap right here for you.

On tonight’s episode as per the E! synopsis, “Nattie renovates her mom’s house; Brie tries to help with Nicole’s out-of-control spending habits; and Eva Marie starts to fear the worse for her dad’s health, and so she comes up with a Vegas bucket list for him.”

Eva Marie is with her family on tonight’s all new episode of “Total Divas” and yet she just can’t seem to make herself enjoy this moment with them. And that’s because she’s worried! Apparently, their family vacation to Las Vegas is the first time her family has been all together in twenty years but according to Eva there’s just something about this trip that appears to be too good to be true.

Her family is all relaxed and her father looks better than he’s had in years. So to Eva that must mean there’s something bad awaiting her around the corner. Because the last time her father appears this excited – he had gone back to taking medication for cancer and he hadn’t told anyone.

So there is a good reason on the books that has made Eva feel this way. Yet she doesn’t know how to handle things from there and rather than make her family appreciate this trip even more – she eventually has them regretting it. Because, once, she started to worry their trip was going to be ruined – she then did everything she could to make everyday special and lived to the max. And, frankly, that’s humanly impossible.

Eva created a list of numerous activities to do. And she had pretty much wiped out her family on day two. Hence no one later wanted to go skydiving or wake up in the am to do so. And truthfully by time that activity came – everyone felt like Eva was pushing them too hard.

Meanwhile, back at home, Nattie ended up doing something she never thought she would. She turned to her estranged husband TJ when she began to feel overwhelmed by her family duties and surprisingly he answered her call when she needed him to. Because it seems that, in spite of everything, TJ and Nattie’s relationship isn’t so bad off that it’s nearly impossible for them to lean on each other.

And Nattie does need help. Subsequently her parents’ home had suffered from a nasty flood some time ago and the elderly couple completely ignored the need to cleanup. So now the house is falling apart and there’s also a risk of mildew.

As for Nattie, she didn’t find out about any of this until she came to visit her mom and saw the house in the condition it’s in. Afterwards, she called up TJ seeing as he was the only she could think of at the time that could help and ultimately the two of them worked together to get her parents’ home back in order. And Nattie started to see the light at the end of the tunnel.

And that’s in regards to both her parents’ place and with her marriage.

Nattie felt like TJ really stepped up this time and even her friends wanted to her to see how much he was helping. One of the things that was ruining her marriage to him is that Nattie has always feared her husband would turn out exactly like her father. A man she would never be able to depend on. Yet, judging him only by what he’s done and it’s pretty obvious to everyone that not only does TJ still loves her but he’s also nothing like her dad. TJ is someone that can be there to help and not someone she constantly needs to help.

So, all in all, TJ might have just saved his marriage by stepping up.

Although, when Eva tried her hand at assisting family – she didn’t get the same reaction. Or for that matter anything close. Instead her father was left furious at her when he found out all her little activities were actually part of an unknown bucket list.

Apparently, no one had told him he had one foot in the grave so when he found out his kids had begun to see him that way – it really did depress him because it made him feel like his family was already saying goodbye. And the facts are these – he’s not sick. Nor has he felt off. So Eva had to apologize to her father for her the things she was doing.

And then, and only then, was the family allowed to continue with their vacation!

But then there was the twins. They started to argue to about how they each spend money and as it turns out Brie isn’t as secure as she thought. It looks like Brie thought she was better off, financially speaking that is, than her sister Nikki. Yet Brie, when pushed, didn’t have answer about what she would do when she had to give up wrestling for motherhood.

Funnily enough, she doesn’t have a plan B!