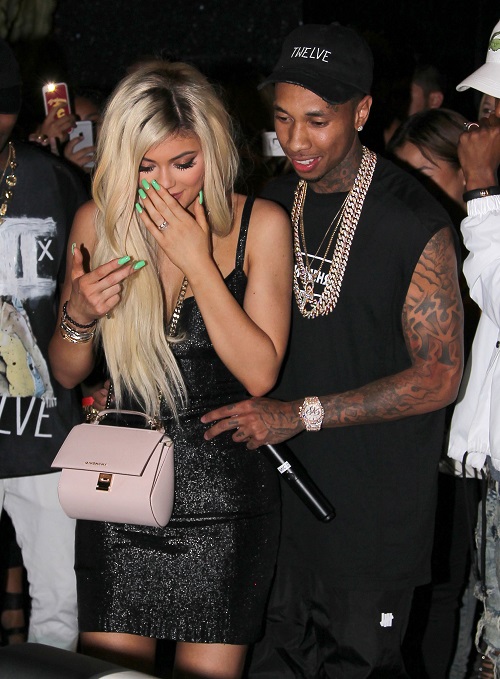 On August 9, the Kardashian Klan got decked out to celebrate Kylie Jenner’s 18th birthday party in West Hollywood. Of course, the famous family was nearly stopping traffic as they arrived at The Nice Guy Restaurant to celebrate Kylie FINALLY being a legal adult. Kylie’s friends and family showered her with gifts on the big day – and her rapper boyfriend Tyga pulled out all of the stops, refusing to be showed up by any of her millionaire relatives. According to US Weekly, Tyga gave his 18-year-old girlfriend a Ferrari!

Tyga is reportedly in some serious financial trouble, and has two different lawsuits pending in court against him totaling over $500,000. According to one of the people suing him, a former landlord, Tyga actually owes thousands of dollars in back rent that he never paid. Here’s how broke Tyga REALLY is – the rapper couldn’t even afford to pay off a court ordered $25,000 to a woman who claims she was sexually assaulted on the set of his music video over four years ago. If Tyga can’t even come up with $25,000, then how did he come up with money to buy a Ferrari?!

According to our sources in the Kardashian camp, Kylie’s family is not happy about Tyga’s birthday gift to Kylie – because they know she is going to wind up making all of the payments on the car. It’s not that Kylie can’t afford the payments, it’s the principle – there is no reason an 18-year-old girl should be supporting her 25-year-old boyfriend. Kylie’s sisters are fed up!

Our source dished, “When Tyga gave Kylie the car, she put on this huge show bragging to everyone about how Tyga was spoiling her. But, Kylie’s sisters weren’t buying it. They know Tyga couldn’t afford to buy the car outright, and Kylie is going to wind up making all of the payments and basically paying for her own birthday present. Kylie’s sisters want Tyga out ASAP – before he squanders away all her money, or even worse convinces her to get married without a prenuptial agreement.”

So, happy birthday Kylie! Here, have a car that you have to pay for. Do you think that Kylie will get a clue now that she is an adult, and realize that Tyga is more in love with her bank account than he is her? Let us know what you think in the comments below!