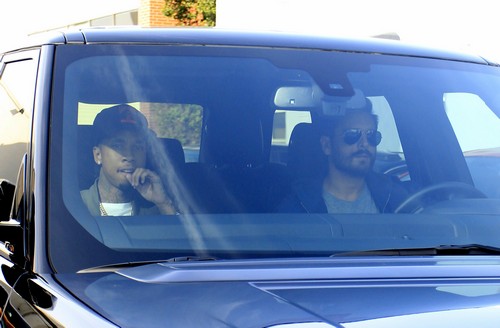 Tyga has taken it upon himself to gift Kim Kardashian and Kanye West’s new son Saint West with a mountain of presents in a desperate attempt to buy back the approval of the Kardashian and Jenner family. T-Raww even signed the card ‘From One Family To The Next – Love Aunt Kylie & Uncle Tyga,’

We know that Kylie was nowhere to be found when those gifts were picked out so what gave Tyga the idea to splurge on Kim and Kanye’s new kid?

Even though Kylie Jenner and Tyga reunited just after his birthday weekend break up, there’s still a lot of trouble in paradise. As a matter of fact, after moving out of Kylie’s mansion, Tyga thinks the break up hammer is going to drop any day now and he’s desperate to smooth things over with Kylie’s family before that happens.

Tyga knows that Kylie Jenner’s whole family is upset at the “Rack City” rapper for continuing to disrespect Kylie whenever she isn’t right by his side. That’s why Jenner and her 26-year old boyfriend stay joined at the hip. Kylie is afraid to leave Tyga to his own devices because he always does something stupid to make her look bad and the 18-year old reality star has had enough.

Kylie’s boyfriend was seen at a car lot on Saturday, December 5 with Scott Disick, another Kardashian hanger-on. Disick has mastered the ability to act like a total sleaze and he still worms his way back into Kris Jenner’s graces every time.

When Scott and Tyga were spotted together, it was assumed that the rapper had hooked up with the reality star to get a little advice on how to deal with Kylie Jenner and the silent treatment she’s been giving him lately.

Kylie Jenner jetted off to Miami for the weekend for the Art Basel in America experience and she left Tyga at home on purpose. Now the “Stimulated” rapper is going out of his mind trying to figure out a way to get Kylie’s attention and stop the impending break up.

Apparently Tyga thinks the way to Kylie’s heart is through gifting her new nephew and tagging himself as family right in the card. Tyga is barking up the wrong tree – Kylie is totally pissed off at her more famous sister’s new fame boost and is making a point of ignoring the birth of Saint West!