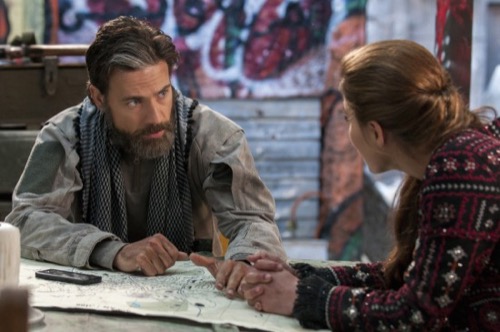 Tonight on FX their original series, TYRANT airs with an all new Tuesday August 4, season 2 episode 8 called, “Fathers and Sons,” We’ve got your recap down below! On tonight’s episode, Jamal [Ashraf Barhom] grows more paranoid as he begins to question Rami’s [Keon Alexander] loyalty; Barry [Adam Rayner] wonders how much the palace’s support means for his survival.

On the last episode, Rami seek Amira’s adviced on how to interpret Jamal’s erratic behavior; Jamal was desperate for a military victory by any mean when he felt the country may be at a tipping point; Barry’s attempted to rescue Daliyah had unforeseen consequences. Did you watch the last episode? If you missed last week’s episode we have a full and detailed recap, right here for you.

On tonight’s episode per the FX synopsis “Jamal grows more paranoid as he begins to question Rami’s loyalty; Barry wonders how much the palace’s support means for his survival; Sammy is saddened by Abdul’s death, but decides to help the insurgents fighting the Army of the Caliphate.”

Abdul is dead and Sammy needed to find a way to get justice for him. So on tonight’s episode of “Tyrant” he is slowly making his way into Ma’an where he hopes to join the rebel Khalil in fighting the caliphate. And he’s doing all of this without knowing that this Khalili he’s counting on is actually his father in disguise.

Though the disguise has come in handy. Barry has turned the name Khalil into a symbol of hope and the longer he stays alive in a warzone then the more people come out to join him.

However a war can’t be won without allies and Barry is smart enough to know that he’ll eventually need them. So he reached out to the Abuddin government and somehow managed to reach Rami. Rami it seems had also heard about this Khalil and knew if he was actually speaking to this man then maybe they could make deal that would drive out the caliphate once and for all.

Only Rami needed to make sure that he wasn’t falling into a trap. And luckily there was a way for Barry to prove who he said he was.

Barry promised to hit a high target member of the caliphate and he agreed to tell the government all about his plans before he acted so that they knew it was him that had granted them another victory. And in return for this promise, all Rami had to do was hold off on the bombs until he could target the caliphate without hurting any civilians. So it was a fair trade-off and if it worked then it could establish lines they could each later call upon if they were ever in danger.

But a lot of things happened in between the deal and Barry’s attempt to fulfill it. First he had heard about someone wanting to donate money to his case. And so he sent his people to investigate this American teenager that was supposedly loaded.

Admittedly, Khalil/Barry’s people did get kind of rough with Sammy. Though he ended up proving to them that he could get access to the money they need. And all he had to do was say that he was Sammy Al-Fayeed.

The Al-Fayeed name after all still carries a lot of weight. But back in the palace, Leila had to inform the still grieving Nusrat that she’ll soon have to give the name up. Ahmed, Nusrat’s husband, is destined to one day to become president and his son will naturally follow him. So says Leila at least. And what that means for Nusrat who can no longer conceive – is that she could finally get the divorce she was pushing for a couple of months ago.

Yet she didn’t seem to be cheering as much as she would have if they had first granted her this request right after Jamal had raped her.

So the Al-Fayeed is all powerful but it is known for turning on its own. In fact Rami had been warned about this very same thing and just when he thought his father would congratulate him – Jamal smacked him down. Thereby confirming all of Rami’s fears.

See, the gambit he had concocted with Barry had worked out in the end and he had brought news of a confirmed ally to Jamal. But Jamal just wasn’t happy. He seems to feel that his son should have come to him first with news about Khalil reaching out. And so he got angry at his son for making decisions without him.

And then he began to suspect his son of some nefarious plan.

Meanwhile Sammy did come face to face with the infamous Khalil and the father/son relationship is more fractured now than ever. Sammy had naturally confronted his father about let everyone believe he was dead. And when Barry’s apologies weren’t enough, Sammy then came to decision.

He said that he didn’t need Barry. Barry had made Sammy feel like he had been longstanding disappointment and that his father had never really accepted who he was. So Sammy didn’t need his father’s blessing to stay on in Ma’an. He had made up his mind and the father that was barely there for him wasn’t going to change it.

And as for Barry, he knew that he couldn’t hide anymore. He chose to cover his voice when he made an alliance with Jamal but Sammy made him swear that he’d call Molly. You know the woman that believes she’s his widow and was just recently trying to find a way to move on.