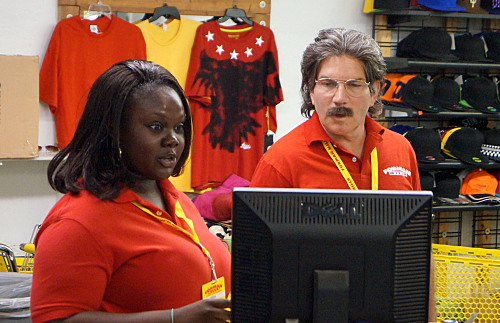 Tonight on CBS their Emmy award winning reality show, Undercover Boss continues for an all new Friday January 25, season 6 episode 8 called “Forman Mills,” and we have your weekly recap below. On tonight’s episode Rick Forman, founder and CEO of Forman Mills, works undercover in his discount clothing outlets.

On the last episode, Robert Powells, President and Co-Founder of The Rocket Fizz Soda Pop and Candy Shops, the largest candy and soda shop franchise in America, embarked on an emotional journey to discover what kept his candy shops sweet. The boss discovered that the inventory system was as old-fashioned as his stores’ classic candies, and he fizzled out while working the assembly line at his bottling plant. Did you watch the last episode? If you missed it, we have a full and detailed recap right here for you.

On tonight’s episode as per the CBS synopsis, “Rick Forman, Founder and CEO of Forman Mills Inc., one of the fastest-growing discount clothing outlets in the country, discovers some defects in his organization. While undercover, Forman grows frustrated by the antiquated cash registers and price check systems that continue to slow his stores’ productivity levels, and he exasperates his employees with his haphazard work style.”

Tonight on #UndercoverBoss, the boss is Rick Forman, founder of Forman Mills – a discount clothing store. Forman Mills is a quarter billion dollar a year discount apparel chain that’s growing very fast. It’s a flea market type environment. Rick says he wants excitement and says no can beat their prices. They have 35 stores in the mid-Atlantic regions but wants to double that number of stores in the next year. His family was into making clothing but they struggled. He made money at the flea market.

He put his stores into the inner city when no one else wanted to. He says they’re reviving neighborhoods. He says each store offers 120 jobs. He says people see him as an intimidating boss and has no filter. We see his office which is crazy messy and the guy seems like a jerk. He has three daughters one of which is special needs. He gets a toupee and a mustache. He’ll be posing as a retired football coach and says he hasn’t been this nervous since is wedding day.

He says he’s going undercover because he wants to sort out issues before their big expansion. Rick heads to a low-performing store in Chicago and meets Mshinda. She’s a sales associate. She says he looks like he’s from a 70s sitcom. She thinks he’s on another planet. He says he has ADD and can’t focus. She keeps calling back and telling him to focus. She says she can’t see him running his own business but says he could run a circus since he’s a clown.

She tells him about 20 times he needs to stay focused. She tells him how to handle price checks. Rick says the price check system is so antiquated. It takes him a long time to find him and says it’s no wonder the store is underperforming and says it’s not the employees’ fault. Mshinda tells him there are no incentive programs there and says the employees aren’t happy. She says she can’t work full time there and has a second job at a hospital. He asks how she does it. She says you do what you have to.

Rick says he has a lot of respect for her. Next Rick goes to distribution center in New Jersey. This is where the merchandise comes in before it’s shipped out to all the stores. He says the lack of technology in the stores is concerning him and it’s all his fault. He meets with Elizabeth who coordinates back stock. She shows him how to wrap a pallet. She says he’s terrible at it and is all over the place and it’s wearing him out. She next teaches him how to operate the fork lift.

He’s a disaster at that too. It’s going in circles. The other employees are laughing and he crashes into a pallet and almost broke a shelf. She finally makes him get off of it. He asks for one more chance but she says no. Elizabeth and Rick chat and she says she has three kids and says her daughter’s father killed himself a couple of years ago. She says she always takes overtime when she can but is barely scraping by and wants her kids to do better than she has. Rick says his companies need to do better by their employees.

Next Rick goes to a store in New Jersey to work in customer service. He’s concerned with how they’re treating their employees. He works with Nikia. She says they were told to not speak to customers unless they speak to them. She says there’s no training program. He’s shocked and says that falls back on him. He’s surprised they have to call the manager for any kind of coupon and they have to stand there and wait. He says the whole process is insane.

They also all share one credit card machine. The registers are so old fashioned they don’t accept credit cards. Brad is shocked by how antiquated the register systems are and says it all sucks and has to change immediately. He chats with customers and Nikia has to tell him to stop talking to people. One customer tells him people are going to kill him for taking too long. Nikia tells him he’s given her a headache. They go to the break room.

He asks if she’s happy and she says none of the employees are happy and says the working conditions are bad and that there are no full-time positions. She says she’s hoping to get a full-time position at WalMart. Rick says his company is on life support and he has to do something about morale. She says she’s a single mother and is doing this all for her kids. She says one of her daughters has Downs and there’s a lot to do that.

He says his youngest has Down 23 and can’t speak. She says her daughter is social. Nikia says she lives in the projects and it’s a bad environment. Rick says Nikia just wants the basics – to have her daughters safe. He says they’ve done more for their customers than for their employees and need to turn this around immediately. Next day, Rick goes to Philly to work with the maintenance supervisor. He goes to see Curtis. It’s the first location he opened.

He tells Rick he takes care of a lot of things in the store. They start in the bathroom. Rick says the smell is really bad and Kurtis tells him people pee on the walls and all over the floor. He leaves Rick to clean it. The soap thing falls off the wall and the toilet is awful. Kurtis tells him to #manup and get it done. Kurtis says it took him way too long. They then go to the warehouse. He tells him to cut up the boxes for the compactor. He says a lot of stuff he does isn’t under his job title.

He says he wants to be a warehouse supervisor but they brought a new guy in. Kurtis says the company doesn’t care about employees and says there is no incentive or recognition program. Rick says he feels bad about the way Kurtis has been treated and says this is a recurring theme he’s hearing from his employees. Kurtis says he has had drinking problems, had lost jobs and was homeless for a time. He says he got tired of it and made a change.

He says he got with good people and this is a job he’s been with for awhile. He says he mentors people at homeless shelters and that doing good helps him stay clean. He says he can take Rick with him if he wants. They go over and Kurtis says he gives back as much as he can and pays for it with his meager paycheck. Rick says his company used to help the community but doesn’t do that anymore. They go hand out some Forman Mills gift cards that Kurtis bought and some clothes to help the homeless people there.

It’s time for the #BossReveal. Rick has his toupee and mustache removed. He gets back to his normal look. He asks about “Brad” and they all tell him that Brad was way out there. They are shocked to hear that he was Brad and that they’re on Undercover Boss. He asks Elizabeth for another chance on the forklift and she says no. He tells her she has a great personality and he wishes they had more people like her. He says he’s paying off her car.

Nikia is next and he says she’s fantastic. He says she inspired him and says he’s bringing in a whole new register system. He also says he was upset that she said she doesn’t greet the customers and wasn’t trained to be nicer. He says that’s his fault. She says they need training and encouragement. He says he’s making her a front end manager, is giving her a $17k raise and making her full-time. He also brings up her kids and her special needs daughter.

He says he wants to give her $15k for each of her kids and wants her to use it help her daughters. She thanks him. She says it well help them get out of the projects. Next up is Kurtis. He says he’s putting him in charge of the new outreach program they’re starting. He says he’s going to double his salary and he’ll be full-time giving the company’s money to the community. He also talks about him being homeless and says he doesn’t want that to happy again.

He says he’s buying him a house of up to $250k. Kurtis is stunned. He hugs Rick. Kurtis says five years ago he was roaming the streets. Kurtis goes out and hugs his fiancee and tells her what happened. He tells her about the house. She’s overcome and hugs him. Rick meets with his employees and tells them he’s learned a lot being on Undercover Boss. He says he’s implementing a profit sharing program immediately. He says he wants to change a lot of lives.

He says they’re also going to put aside a million dollars a year to the communities they have stores in and also give community service time. He says today is the first day of the rest of their business. Elizabeth is working on her college account for her kids. Nikia is happy in her new management position and moved out of the projects. Kurtis got a three bedroom dream home. On a side note, I still think that Rick should have ponied up for a house (even a modest one for Nikia and her special needs daughter).