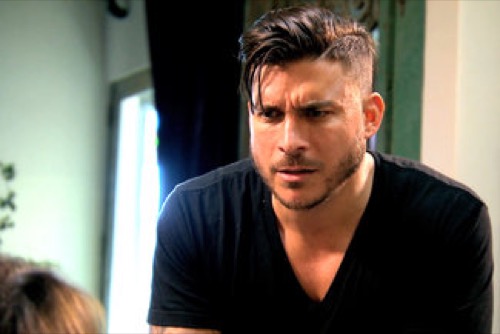 Tonight on Bravo Vanderpump Rules returns with an all new Monday November 30, season 4 episode 5 called, “Cock of the Walk,” and we have your weekly recap below. On tonight’s episode, convinced that Kristen Doute is cheating on him, James Kennedy seeks revenge by hooking up with Lala.

On the last episode, Lisa Vanderpump and the SUR crew forced Scheana to reassess her marriage now that Shay’s secret life was out in the open. Jax campaigns to get his new flame a job at SUR, even while things heated up between him and Lala. Sandoval and Schwartz pitched Lisa a business plan. Kristen and James seek couple’s therapy. Did you watch the last episode? If you missed it, we have a full and detailed recap right here for you.

On tonight’s show as per the Bravo synopsis, “convinced that Kristen is cheating on him, James seeks revenge by hooking up with Lala. Lisa schools her staff on fine wine, Katie and Ariana urge Scheana not to sweep marital problems under the rug, Peter chops his ponytail, and a jealous Jax recruits Kristen in his scheme to pull Lala away from James.”

Tonight’s episode is going to be another drama packed one, which you won’t want to miss. So be sure to tune in for our live coverage of Bravos’ Vanderpump Rules Season 4 episode 5 — tonight at 9PM EST! While you wait for our recap, hit the comments and let us know how excited you are about this new episode of VR tonight and what you think of the current season so far.

Scheana tells Lisa that she and her husband Shay are working on his problems, including weight loss as well as his addiction. She tells Lisa that Sandoval is going to come over and help them cook healthy food.

Lisa asks Jax where Brittany is, and he says she’s in Kentucky. He says that he doesn’t do long-distance relationships, and he would date her if she moved to LA.

They talk about Scheana and Shay, and Jax says that Shay doesn’t feel free because Scheana doesn’t let him have any freedom.

Lisa asks Jax why he is being so mean about Scheana and Shay’s marriage.
“I have milk that has a longer shelf life than that marriage,” he says, and Lisa tells him he is being mean.

James and Lala make out, and Lala asks him about his relationship with Kristen, which he says is over. James had told Lala that he and Kristen broke up.

Leter that night, Kristen arrives at Sur and asks Lala to get James for her. She goes up to James and tells him that she is there waiting for him out back.

James tells Peter he has to sort something out in the back and goes to talk to her.
James starts by immediately telling her that he doesn’t trust her and he thinks she slept with someone, obviously to distract from the fact that he is the cheating whore. He says he isn’t going to raise his voice or call her names, even though he probably should. Kristen says she doesn’t want to be with him anymore, and he says he doesn’t want to be with her either. Kristen says good, they’re done then.

He points at himself and tells her that he isn’t going to have him ever again. He says that if she seems him again it’s going to be her stalking him like she does all of her ex-boyfriends.

Meanwhile, Lala tells Jax and Sandoval what is happening and that she and James hung out.
Jax tells Lala that he is a grown man and is scared of Kristen. He jokes by telling Lala that Kristen knows where she lives and who her family is. Sandoval agrees, saying he used to date her.

Outside, James tells Kristen that she is messed up and has problems. Kristen says she is sorry, and she feels like her past has affected James and she feels bad for that. She says she has changed, and he says that she hasn’t and is the same person she has always been.
Kristen tells him that she feels like he is beautiful and talented and is killing himself by following a path of self-destruction.

James yells at her, asking who is ruining his life. She cries and tries to leave, and he says that he is happy he isn’t with her. He then puffs on his cigarette and tells her that he is going on a date and it’s going to be better than any time he has ever had with her.

Jax proposes an anti-fraternization rule at Sur, and Lisa asks him if he is asking this to prevent Lala from hooking up with James. He admits that James is messing with his game a little bit.

Kristen tells her friend about her fight with James and about Jax telling her that James and Lala have made out. She says she woke up super sad, barely slept, threw up, and then went to therapy and started feeling better. She says she asked herself what she is missing in her life.
(Jax is shown telling Katie and Ariana that he thought Kristen knew about James and Lala before he told her.)

He invites Sandoval, but he immediately refuses to go.

Scheana, Katie and Ariana go to the nail salon.

The girls talk about Kristen, who has been texting Katie about Lala and calling her a bitch, blaming her for hooking up with James.

Scheana takes Kristen’s side somewhat, saying that Lala is the type of girl who will jump into bed with someone’s boyfriend as soon as they are broken up.

Scheana talks about her own marriage, saying that she and Shay are moving on from the events of the last week as if they didn’t happen, and Katie reminds her that the issues they are dealing with are serious. Scheana says she thinks Shay understands after he came so close to losing her two times, and that she doesn’t think he will mess up again and will do anything in his power to make her the happiest girl alive.

James and Lala go on a date at a restaurant.

Lala tells him that he is completely different from any other guy she has ever been with, saying in confessional that she usually goes for the steak, but she is down for some green bean.
Lala brings up Kristen, and James defensively says that the two of them are definitely done. Lala asks if she is the type of bitch to pick her lock, and he says no, but she may confront her.

Scheana tells Lisa that she and Shay have been going to the gym together, but there are a lot of things he still needs to work on. Lisa asks where he is working, and she says he isn’t currently working. Scheana says she has enough money to support him for now, but Lisa tells him that she will become resentful.

Lisa tells Scheana to be tough on Shay and not accept any excuses.

Jax, Katie, Scheana, Lala and James meet at the bar.

Scheana asks James and Lala if they are dating, and they say they are having fun. Scheana says she heard some things and want to ask Lala about some things.

Lala says that they went on a date and it’s just fun and games. She says that if James and Kristen get back together tomorrow it is what it is.

Shortly thereafter, Kristen shows up, and James makes a quip about how Kristen is already close with Jax again. Everyone tells James to calm down as he continues to insult Kristen. Jax offers to take Kristen outside, and she goes, but not before James sarcastically says that Kristen would love that.

Inside the club, Lala tells Katie that she feels like she should go talk to Kristen.
Kristen tells Jax that James was just her rebound from Sandoval, and she thought it was more than that but it wasn’t.

Lala comes out and Jax goes back into the club.

James then arrives, and sits between the two of them. Kristen says she doesn’t want to talk to him, and Lala says she thinks they are both on the same page. James asks what is going on, but the two get up, clink their glasses and storm off. James scolds Kristen, saying “this is what [she does].”

Back inside the club, Lala refuses to talk to him and says she is offended.

James tells Lala she is being a basic bitch because she listens to Kristen for five minutes and then goes against him.

Scheana yells at him, telling him he doesn’t speak to any woman like that, ever. “It is so rude and degrading, and I am so not a feminist, but stop.”