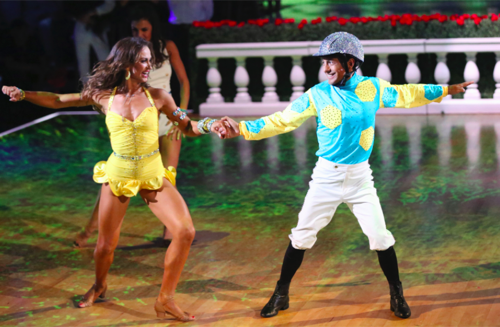 Tonight on ABC Dancing With The Stars returns for a second week and Victor Espinoza and his professional dancing partner Karina Smirnoff danced a Rumba routine. On tonight’s episode the 13 couples dance to a song that commemorates the professional dancer’s hometown. Did you watch tonight’s episode? If you missed it we have a full and detailed recap, right here for you. Did you miss any of tonight’s performance videos? If you did we have them all, right here for you!

On last week’s premiere episode of DWTS Victor performed a Salsa and the judges scored Victor a 15/30 for her performance. Julianne Hough loved his performance and had this to say, “That was definitely a fun way to start the season. Those hips though! I gotta be honest, I was really surprised, I thought there would have been a little bit more of something stiff going on down there. But, you know what they say – big things come in small packages.”

Judges’ comments on Victor’s Week 2 Rumba: Julianne: “You looked like you are ten feet tall tonight.” Bruno: “You had the commanding performance of a giant.” Carrie Ann:“Whoever said size matters never met you, it was amazing.”

Watch the video below and let us know what you think, do you agree with the judges comments? Do you think Victor did enough to avoid elimination tomorrow? Sound out in the comments and let us know your thoughts?