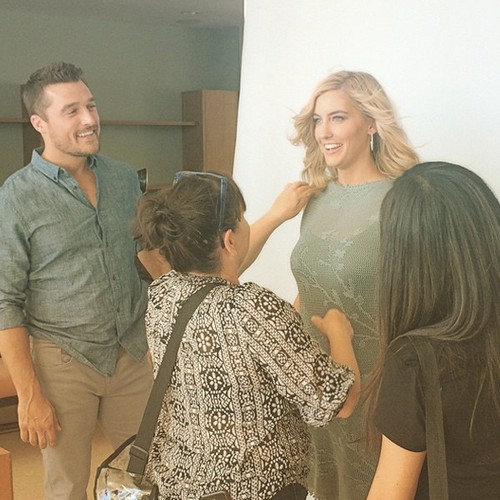 Chris Soules and Whitney Bischoff have not a set a farm wedding date, and Chris made it very clear that he has no intention of marrying his Bachelor fiancée any time soon, yet Whitney is bragging to everyone that will listen about her farm wedding and all of the cutesy details. Since they filmed The Bachelor finale in November 2014, Chris Soules and Whitney Bischoff have barely spent any time together – and Chris has gotten a taste of life as a celebrity and has no intention of settling down with one woman, or giving up his five minutes of fame to move back to Iowa and have a cute farm wedding and play house.

The April 13th cover of Life & Style Magazine features a photo of Whitney Bischoff and teases, “Whitney Tells All” about her farm wedding and all of the inside details. Whitney had baby fever while she was filming The Bachelor, and constantly gushed about how excited she was to marry Chris Soules and become a farm wife. But, that was a long time ago. Either girl can’t take a hint – or she is much more business savvy than any of us gave her credit for.

According to insiders, Whitney is constantly gushing about her wedding plans, and will tell anyone who will listen about her farm wedding. But, Chris Soules doesn’t want to go back to the farm, and considering he has reportedly already cheated on her with multiple women (Sheena Schreck, Witney Carson, Etc) it is safe to say that he doesn’t want a wedding either. So, Whitney Bischoff could really be that delusional and completely oblivious to the fact that Chris isn’t going to marry her. Or, she has already mastered the name of the Bachelor fame game and knows that the people expect a wedding and if she hopes to remain relevant she has to at least pretend that she is planning one – like Andi Dorfman did.

What do you think Bachelor fans? Are Chris Soules and Whitney Bischoff ever getting married? Does Whitney actually think that they are, or is she just pretending she is having a wedding to stay in the news? Let us know what you think in the comments below and don’t forget to check CDL tomorrow for more Bachelor and Bachelorette spoilers and news.