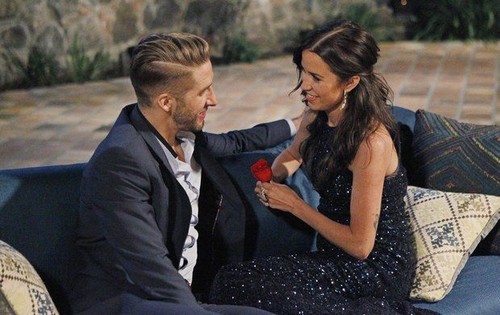 The Bachelorette 2015 spoilers have been teasing who won Season 11 for weeks that Kaitlyn Bristowe will make a shocking decision during the final rose ceremony – and fans will not want to miss a single second of the drama. According to spoilers leaked by Bachelor blogger Reality Steve, Nick Viall and Shawn Booth are the two guys standing at the final rose ceremony of Season 11. However, when Kaitlyn Bristowe arrives, she doesn’t choose a 2015 winner – she informs Shawn and Nick that she has changed her mind and doesn’t want to get married, and she leaves them both and heads back to Canada.

Bachelor blogger and spoiler kind Reality Steve has been spoiling the endings of The Bachelor and The Bachelorette for years, and he is usually right more times than he is wrong. Considering the way Season 11 of The Bachelorette has been going so far, it’s not exactly shocking that Kaitlyn Bristowe doesn’t choose a winner. We’re beginning to wonder if Ian Thompson is on to something, did she join the show just to make out with a bunch of hot guys on TV?

But, could this be one of those years that Reality Steve’s spoilers are actually wrong? Steve’s Bachelorette 2015 spoilers indicate that there is now winner of Season 11. But, Kaitlyn Bristowe just posted a video of herself in bed with contestant Shawn Booth on SnapChat. Does that mean that the couple is actually engaged and The Bachelorette producers were able to get one over on Reality Steve? Or, perhaps after they filmed the Season 11 finale Kaitlyn Bristowe had a change of heart and decided that she did want to get married – to Shawn. Then there is always the theory that Kaitlyn posted the video just to make Nick Viall jealous, because the video hit the internet just a few days after photos did of Nick on a date with Whitney Bischoff in Chicago.

Have you been watching Season 11 of The Bachelorette? Do you think that Reality Steve’s spoilers are right and there is no winner – or could the Bachelor blogger be wrong and Kaitlyn is currently engaged to Shawn Booth? Let us know what you think in the comments below!