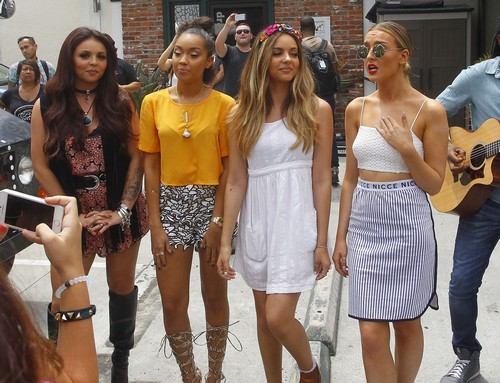 It’s safe to say that Zayn Malik and Perrie Edwards’s break-up was not amicable. After a lengthy relationship, the former One Direction singer reportedly dumped his fiancée via text message last month. And, since their break-up Zayn has been on the prowl and flirting with the likes of Kylie Jenner, her sister Kendall, and Selena Gomez on social media. Meanwhile, Perrie has been lying low – and trying to take the break-up like a champ, but Zayn is not making it easy for her.

Zayn Malik took to Twitter to diss his ex-fiancee during her Teen Choice Awards performance over the weekend – and even diehard One Direction fans believe that Zayn’s latest jab at his ex was a low blow. Perrie Edwards and her band Little Mix took the stage on Saturday August 15 to perform their hot single. During the Teen Choice Awards, Shady Music Facts posted a photo of Little Mix and Fifth Harmony – they asked their followers which band was better, and ordered them to retweet for Fifth Harmony or favorite for Little Mix. Apparently, Zayn was voting for Fifth Harmony because he retweeted the tweet, dissed Perrie and her band Little Mix, and created an uproar on Twitter.

Perrie Edwards held her head high and didn’t respond to Zayn Malik’s obvious Twitter diss – and she got her revenge by stunning on the Teen Choice Awards stage. Now, everyone is dying to know what exactly happened between Zayn and Perrie to make him hate her so? Did Perrie do something grimey to the former One Direction singer to cause him to lash out like this – or is he just a total jerk? Both Perrie and Zayn have been relatively silent about their actual break-up, so we may never know the truth.

Do you think that Zayn Malik has crossed a line and is just being a jerk now? Or are his actions acceptable? What do you think of his Twitter diss? Let us know in the comment section below!