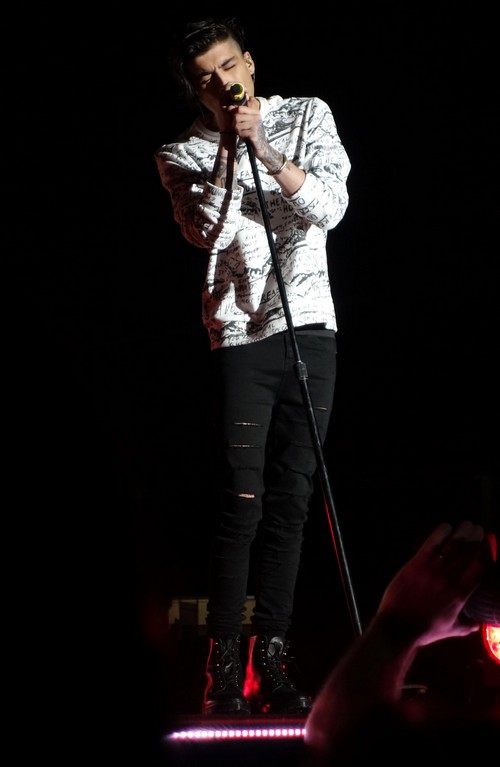 The boy band One Direction is breaking up now that Zayn Malik has quit. Niall Horan, Liam Payne, Harry Styles and Louis Tomlinson, and Zayn Malik have been enduring scandal, rumors, and controversies, but it looks like the band is slowly crumbling.

One giant crack the group’s foundation was Zayn Malik. The engaged singer was taking a temporary hiatus, citing the “stress” as the reason for his break. Some rumors claim Zayn is fighting with the other members of One Direction, but a source assures E! News that there is no bad blood. Malik “gets on with everyone” and fighting isn’t a problem, he’s just a “passionate and sensitive” guy who “finds the spotlight to be a bit difficult.”
Zayin Malik has officially quit One Direction and confirmed his departure with this statement:

“My life with One Direction has been more than I could ever have imagined. But, after five years, I feel like it is now the right time for me to leave the band. I’d like to apologise to the fans if I’ve let anyone down, but I have to do what feels right.”

Fans are not ready to joke about Zayn Malik leaving One Direction. Before Malik quit, the band was doing a photo call in Indonesia, and Liam Payne covered Malik’s picture on the poster he and other members were holding. Payne captioned the photo, “#makinglightofasituation sorry for the laughs guys”. Directioners, loyal fans of the British boy band, didn’t appreciate the jest. Most skewered Liam for being “disrespectful” and “shady.”

Since Zayn has second break from work, his first absence was during a performance for the ‘Today’ show in November, the remaining members no longer introduce themselves as One Direction. Instead, the heartthrobs take the stage and present themselves as Liam Payne, Niall Horan, Harry Styles, and Louis Tomlinson. Could this be a move to break One Direction off into solo careers?

The one hope the band seems to have is Harry Styles. The former boyfriend of Taylor Swift has “been a rock” during the drama says Hollywood Life. “Zayn has his issues and he’s dealing with them. Louis is struggling emotionally. Liam and Niall have created kind of their own clique. But Harry, is the heart of the band and he’s keeping them from falling apart,” the HL insider explains. “First off Harry is just a great guy who all the guys like being around. Second he’s a good friend to all of them and really listens to their problems.”

Harry is looking towards their tour and making another album. Styles is driven to see the band succeed and he’s “constantly writing songs and talking to the guys about the direction of their music.” The band has planned a fifth album, hopefully they will make it to the studio and see continued success as a 4 man group.

Can one guy keep the band together? Do you think One Direction will completely break up? Who would have the most successful solo career?