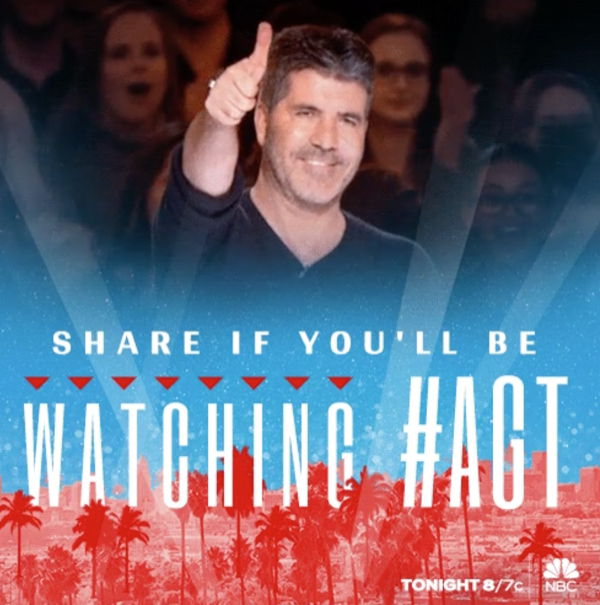 The judges were in for another long night on tonight’s all new episode of “America’s Got Talent” as they sat back to either enjoy or cringe away from what people could do however there was one act that just made them feel like tonight was going to be different.

One of the first acts of the day managed to surprise them and received a rare four yesses when he managed to get all four judges to agree that he was in fact, talented. Cody who was only fourteen years old had surprised the judges with his twirling act and surprisingly it really was twirling. No not the twirling that a certain housewife made famous, but the actual twirling with batons and accompanying music. So Cody who did receive his share of criticisms because his music choice was a tad outdated, especially for one so young, had been able to overcome whatever deficiencies his act might have and win the coveted four yesses from the judges.

But unfortunately, the next act of the day just couldn’t keep up the momentum. The singing group that called themselves Just Us were cute and they were capable of making the judges laugh as the 50s-60s set began their routine of Megan Trainor’s “All that Bass”, but they hadn’t come onto that stage to simply make people laugh and the truth turned out to be that their singing wasn’t enough to keep them in the competition. So while it might have been unfair to them, the judges had no other choice than to say no early on and tell them goodbye.

And yet the duo that followed Just Us funnily enough went on to do their version of the same song. Two guys that apparently at one of the holiest places in Israel had come together three years ago to form a beatbox duo and they were actually pretty darn good. The guys whose names were, Ilan and Josh, had started out singing the song and that admittedly gave people in the audience the impression that they couldn’t sing. Though their real talent wasn’t in the singing portion, it was in the beatbox that was clearly a winner with both the judges as well as the audience.

However, the judges would then go through a series of acts that they didn’t think was up to par before they eventually came across the Dance group that called themselves the OutLaws. The hip hop dance group was entertaining with the many technical achievements they were able to though for some reason they sort of failed to impress Heidi. Heidi said that she wanted to be out of her seats like everyone, but that the dance she saw didn’t quite warrant it. So not all the judges agreed when the OutLaws were passed onto the next level.

Only Simon seemed to be just fine with outvoting his fellow judge.

Following a contended decision, however, was Daniel Joyner. Daniel sang an oldies favorite Otis Redding’s Try “A Little Tenderness” for the judges though his nerves did keep him from fully letting go during the performance. The judges later told Daniel that he was little stiff in the beginning and how that had made the performance feel somewhat dry. But it seems they saw something in him because while they were clearly expecting more, they still gave Daniel an all-around yes to see what could do now that he had gotten used to the crowds.

Yet, not everyone got a second chance to do better. Many went up on that stage afterwards hoping that they were good enough or that judges could see that they were actually trying though the judges usually vetoed people from the beginning. So they if they had done that with Jon Berhardt then they never would see his potential. Jon’s very unique act was just different. It started out as a hot mess and then suddenly everyone began to pay attention in order to see what Jon would do next.

So Jon was another person that got through on contended vote. Three of the judges had seen his charm, but Heidi was quite firm about not getting his act at all. Though compared to Simon, you wouldn’t think that she was the tough judge so it was surprising how much Simon wanted to give someone the benefit of the doubt while she was the party pooper. And yet there were a few times that she did get up out of her seat.

The judges, including Heidi, had eventually been blown away by a Dance Duo called Sila Sveta. The dance duo had come together with a creative director from Russia to perform a one of kind dance that was both classical and new. And it was literally a feast for the eyes. The creative director had thrown in visuals to go along with the dance and while a play on light was nothing new to the judges, what Sila Sveta did was. So there any one person that felt they shouldn’t pass onto the next level.

Though not to throw shade or anything but Moya Angela for one didn’t necessarily need anything to accompany her when it was her turn onstage. She just got up there and sang her heart out as she performed Celine Dion’s “All Coming Back to Me”. Though the great thing about Moya was that she could hit the notes as well as hold onto them as long as Celine herself. So there wasn’t a split decision for Moya or even signs of the judges hesitating to say yes. They simply all said yes and Howie for one had been especially kind when he told Moya that she looked as if she belonged up there on that stage.

But Howie wasn’t laughing when he eventually had to go up onstage to become part of an act. A juggling duo called the Passing Zone had called him up because they said they needed his help when in actuality they wanted him to take a huge risk. They wanted him to lie on the floor while someone juggles incredible dangerous items over his head and then to stay patiently still as another juggle jumps over the both of them to continue the juggling act. So what Howie did was scary and he had genuinely looked scared as he placed his lives in the Passing Zone’s hands.

And yet the Passing Zone knew what they were doing because Howie hadn’t died up onstage. Howie lived through probably one of the funniest acts of the night and when the jugglers managed to impress everyone with what they could do – his face just showed astonishment. He had put his faith in them however there clearly had been a part of Howie that wasn’t sure if the jugglers could pull off what they were doing until they were actually able to pull it off. So the judges all enjoyed that act and both Mel and Heidi had wanted Howie to be part of the Passing Zone’s future acts in this competition as well.

Howie on the other hand not so much.

Rubic Cubes Magic though was something no one had ever heard about before. Steven Brundage had claimed that he was the only one in the world that performed it so the judges weren’t sure about what to think until they saw Steven in action. Steven had given a rubric cube to Simon who then mixed it up and everything. And out of nowhere Steven was able to replicate what Simon did to each and every side. So there was only one explanation for what Steven was able to do – magic.

Howie thought it was magic, Heidi thought it was magic, Mel thought it was a magic and even Simon who was dumbfounded by what happened had called what Steven did magic. So Rubic Cubes Magic received an all-around yes from the judges on tonight’s episode because they all certainly enjoyed what they saw. And Steven got closer to the finale with his unique act.

Though a certain RL Bell from Houston, Texas ended up being a hot button issue. RL was in his fifties and he looked good for his age. He was all muscles and long silky hair however RL let something like showmanship sort of get in the way of his performance. RL had sang Billy Paul’s “Me & Mrs. Jones” and for some reason, he felt that he should play to the women in the audience so he ended up stripping down to his very revealing vest that would better show off those muscles. And that was a bit too much for the men in the audience.

Simon called it corny and he tried to tell RL that everything that he did on stage took away from his singing. Which was really pretty good if he hadn’t tried to do a strip tease onstage. Yet, RL didn’t seem to be listening to what Simon had to say so Howie told him no while Simon decided to see if they could get RL to tone it down. And therefore RL was able to move to the next round though he would have to work on just singing and nothing else.

Although speaking of something else, the last act of the night was just something else. Dorothy Williams who was in her nineties hadn’t just played at doing a strip tease, she had actually gone ahead and done it. Dorothy had stripped down to short and nude colored T-shirt that had tassels on the nipples. And boy did she twirl those tassels to the amusement of everyone around her.

Sadly, she still got a no, but she had been a sight worth seeing any day of the week.