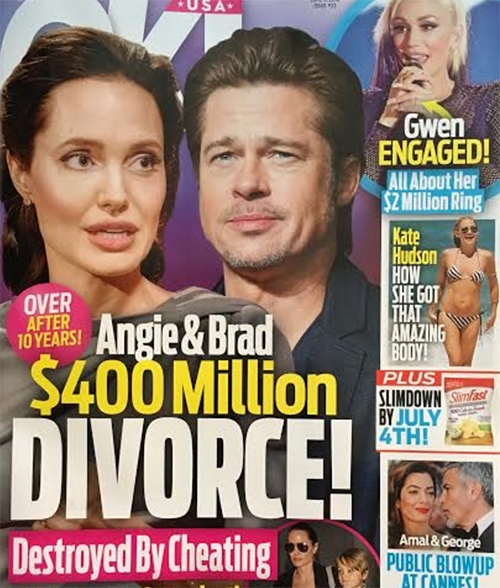 Are Angelina Jolie and Brad Pitt finally over? Divorce reports have been floating around about Brad and Angelina ever since the couple tied the knot and got married. It’s no secret that Jolie and Pitt’s marriage is less than a fairytale. But, according to a new tabloid report, the couple has had enough, and is finally filing for divorce.

This week’s cover of OK! Magazine features a photo of Brad Pitt and a devastated looking Angelina Jolie. The headline reads, “Angie And Brad $400 Million Divorce, Destroyed By Cheating.” The tabloid cover goes on to tease inside info on their “jealous rages and couple’s therapy,” plus who will get the couple’s children in the event of a split.

Angelina Jolie’s health has been under fire again when she was photographed this year appearing thinner than ever, and overall just unhealthy and sickly. According to OK! Magazine’s inside sources, Brad Pitt has grown tired of his wife not taking care of herself, and fighting with her constantly over her health.

The magazine’s inside source explained that Brad Pitt is, “exhausted from spending so much energy trying to get her to take better care of herself.” OK! goes to allege that Angelina Jolie barely eats, has a serious wine guzzling habit, and smokes like a chimney.

Oh, and of course there are more cheating allegations and “jealous rages.” This time, Angelina is supposedly jealous of Brad Pitt’s co-star, Marion Cotillard. The tabloid’s inside source points out that Angelina would be “furious” if Brad slept with Marion. Well, obviously…

There is no doubt in our minds that Brad Pitt and Angelina Jolie have some serious issues with their marriage. But they have both had those issues for over 10 years. Don’t you think if they were going to get divorced, they would have by now? Plus, with their kids and various joint accounts and properties, it would be easier to just remain married at this point.

What do you guys think? Will 2016 really be the year that Brad Pitt and Angelina Jolie get divorced? Share your thoughts in the comments below!