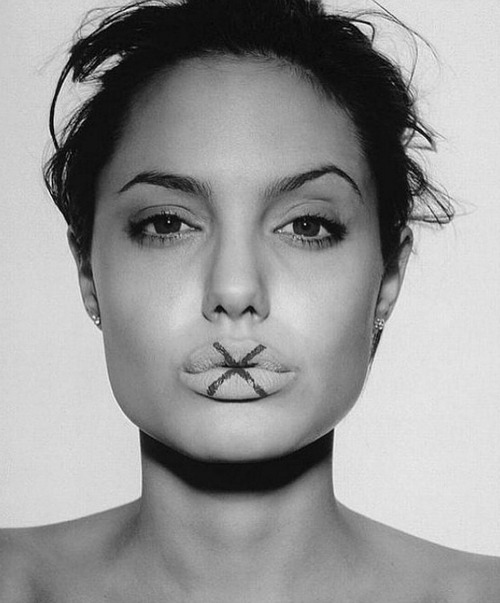 Angelina Jolie has apparently had a change of heart when it comes to her soon-to-be ex-husband, Brad Pitt and her public smear campaign against the father of her children. There’s a new report that says the Hollywood actress will go ‘radio silent’ as she doesn’t want Brad to be prosecuted over allegations that he abused their 15-year-old son Maddox.

The ex-couple currently have a temporary deal that gives Angelina physical custody of all six of their children right now.

Even though Angelina Jolie was the one to pull the plug on the couple’s two-year marriage, she is now pulling back from her nasty public smear campaign against him. Sources close to the actress have apparently been leaking stories of how Brad’s alleged alcohol and substance abuse was getting out of hand and that Angelina Jolie feared for her children’s well-being, especially after a fight between Brad and Maddox that supposedly happened on a private plane.

While sources close to Brad Pitt say that the actor did shout at his son, he is denying that he ever got physical with him.

As far as their current agreement, according to TMZ, one source close to the situation said, “This temporary agreement will last until October 20. This is a completely voluntary agreement that has a structured decision-making plan. Neither Brad nor Angelina were forced to get counseling, they both volunteered to do so for the sake of the family.”

Of course, there’s speculation that one of the reasons why Angelina doesn’t want to prosecute Brad is there’s a good possibility that he might leak plenty of dirt on her in the meantime, too. So far Brad Pitt or his team haven’t suggested in anyway that Angelina Jolie might be a mad mother while the actress has apparently been slinging mud in his face ever since she filed for divorce.

It wouldn’t surprise anyone if Brad Pitt ended up taking Angelina to court for defamation for all of the unsubstantiated assertions of abuse that has been made against him.

There’s without a doubt that Angelina is back peddling now because she sees the public backlash she’s been getting for trying to destroy her husband’s public image, if not also his Hollywood career.

While no one knows for sure what led to the demise of their marriage, one thing is for sure: Angelina Jolie is seeking revenge, but she’s also dragging her children in it and perhaps even damaging their reputation with their father.

Angelina Jolie’s smear campaign has clearly backfired against her and now she’s scared that Brad Pitt might retaliate by telling the world the real truth about what goes on behind their closed doors. Do you agree, CDL readers? Come back to CDL for all your Angelina Jolie divorce news and reports.

Update: Angelina Jolie has added legal power to her team of lawyers by hiring renowned trial lawyers Pierce O’Donnell and Bert Fields – so while Angelina’s PR struggles to save her from being known as Hollywood’s new Black Widow she continues to prepare to take his children from him.

TMZ reports that Angelina hired Pierce O’Donnell and Bert Fields in a move to bolster her team that’s led by disso queen Laura Wasser. The explanation is simple — Pierce and Bert are the most coveted trial lawyers. Obvious question — Why does Angie need trial lawyers? Glad you asked … if her divorce case with Brad Pitt gets super ugly … Pierce and Bert will handle it.