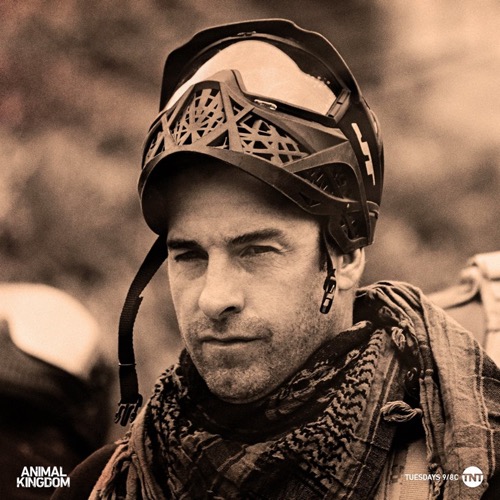 Tonight on TNT Animal Kingdom airs with an all new Tuesday, August 2 season 1 episode 9 called, “Judas Kiss” and we have your weekly Animal Kingdom recap below. On tonight’s episode, Tensions soar as the Codys prepare for their big heist.

On the last episode, Tensions soared as the Codys prepared for their big heist. Did you watch the episode? If you missed it we have a full and detailed Animal Kingdom recap, right here for you.

On tonight’s episode per the TNT Synopsis “The Codys aim for the biggest score of their lives as the cops put J in an impossible position. Meanwhile, Catherine arrives to make amends, raising Smurf’s suspicions in the process, and Pope is enlisted to investigate.”

Tonight’s episode of Animal Kingdom looks like it is going to be great and you won’t want to miss it, so be sure to tune in for our live Animal Kingdom recap at 9:00 PM EST! While you wait for our recap hit the comments and let us know how excited you are about season 1 episode 9 of Animal Kingdom.

J had been so angry about what Nicky told him and she had known that would happen going in however she never expected that there would be consequences because of what she did. So she hadn’t known that J would then visit Alexa Andersen’s place or that he would let Alexa talk him into agreeing to a meeting with Detective Sandra Yates. But it’s not like the detective was solely working to take down just one of the Cody boys, she actually wanted to take down the whole family and that included both J himself as well as his own grandmother. Who recently gotten to know since his mother’s passing.

So Nicky telling J that she had slept with one of his uncles had ended up meaning nothing good for him. It had made him angry and that anger was what made him reckless. However, J hadn’t been as reckless as Catherine. Catherine had wanted to make a run for it with her daughter and she had been smart enough to know that she wouldn’t get very far without money so she had gone over to Smurf’s. Catherine had known that Smurf had emergency cash at the house so she had left her daughter with Smurf to keep the older woman busy while she stole the money she would need on the road. And although that had been a good plan, it hadn’t been flawless because she had forgotten the most important thing about children as young as her daughter.

Children that age had unfortunate tendency to say anything that came to mind. So Lena knew that she had to keep her mommy’s friend a secret from her daddy, but didn’t know that she had to keep it a secret from her grandmother who naturally asked about his friend as well as whether or not he really had a siren that Lena played with. Though luckily Smurf hadn’t thought much of what Lena told her. She had known that Catherine was up to something and her first instinct had been affair so she hadn’t checked her place after Catherine took Lena home. And she hadn’t called her sons while they were in the middle of an operation to tell them that Catherine had been speaking to a police officer.

But funnily it wasn’t just Catherine that was speaking to the police. J had agreed also to talk to the detectives and, unlike Catherine, he at least was telling them things that could presumably be enough to arrest the Codys. Even if it was minor offences instead of what they were doing with Nicky’s father. So J’s revenge was quite something. He told police that he had seen drugs and guns at the house so that was more than enough to get a warrant however Sandra ended up wanting something more than that and she was prepared to use Alexa to get it. Sandra had wanted J to wear a wire around his family and so she told Alexa to tell J that they would be together after everything was over if he wore that wire.

So Alexa could have done anything. She could have refused to do as the detectives asked although that would have meant she would go to jail and as another option she could have also have told J the truth. That they didn’t have a future together and that he was putting his life at risk just because Sandra had an agenda. Yet, Alexa went along with the plan and she had told J whatever he needed to hear to turn against his family. And all the while, his uncles had come back from their naval base heist and his grandmother Smurf was forming a plan with Pope.

Smurf apparently had checked her place not long after Catherine left with Lena and before the boys came back. So she had noticed the missing money and that with what Lena said had made her draw her conclusions. Which also wasn’t admittedly that far off base so that’s when Smurf came up with her plan. Smurf talked to Pope and had told him everything she had found. And then she began whispering into Pope’s ear that Catherine couldn’t be trusted even from the start because of what she did to Pope.

Smurf had told her son that Catherine had led him on and that she had been using him until she tossed him aside. So once Smurf had been done riding her mentally unstable son, Pope had gone out to Catherine and Baz’s place and had told Catherine what Smurf told him. He said that Smurf believed she was making a run for it so he had then come right out and had asked her if that were true. However, Catherine denied it. Catherine said that she had been thinking about running away and that hadn’t made up her mind so had then tried to distract Pope by telling him that she had made a mistake. And that he was the one that she should have been with from the beginning.

Catherine had gotten desperate by then so she had tried telling Pope what she thought he wanted to hear. Though by doing so, she basically confirmed that Smurf had been right and that she was a threat. So Pope had killed Catherine and he had also tried killing Lena as well in order to make it look as if Catherine had run with Lena. And so Baz wouldn’t suspect that either Pope or Smurf had a hand in killing his family.

But Pope is generally not in the best conditions so getting asked to kill Lena had been a true turning point for him. He had tried to smother the little girl like he did with Catherine yet couldn’t do it and she ended up waking up in the car while he was burying Catherine. So Pope didn’t’ know what to do. He knew what Smurf wanted him to do and had a pretty hard time with following her orders so he ultimately decided to let Lena live. And brought her back to the house where she was later found by her father Baz to be ok.

J on the other hand was not in a good place and Smurf had recently found out that he was sleeping with his teacher so it won’t be long until she checks out Alexa for herself.