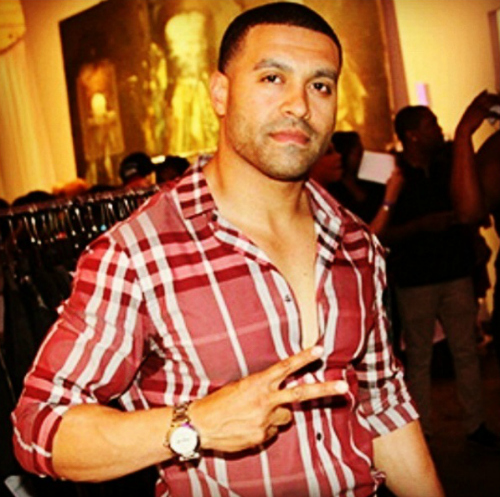 Apollo Nida, estranged husband of Phaedra Parks from The Real Housewives of Atlanta, has reportedly been making trouble in federal prison. According to sources, Apollo is bullying his fellow prisoners and generally not showing them any respect or courtesy.

Former reality TV star Apollo Nida is serving time for wire and bank fraud after he allegedly laundered $2 million as part of a purported scam. Nida started serving an eight-year prison sentence in September of 2014.

An insider gabbed, “Apollo thinks he’s better than everyone else because he’s famous. Obviously, his behavior doesn’t win him any friends.” Apollo’s attitude problem not only is apparent to his fellow inmates but still extends to his wife, Phaedra Parks.

The two have been fighting off-and-on for years, as cataloged on The Real Housewives of Atlanta. Phaedra wasn’t at Apollo’s sentencing – and before heading to prison, Apollo reportedly threatened her. Apollo has continued to refuse her a divorce and has bashed Phaedra on social media.

It seems like Phaedra Parks is determined to have nothing to do with Apollo, but the convict won’t allow them to part ways, insisting that he see their children. Allegedly, Apollo Nida has been breaking simple prison rules like cutting in the meal line and microwave line.

He has also been reported to have disrupted a pool game so he could start one of his own. He has been making more enemies than friends at Fort Dix Federal Correctional Institution in New Jersey.

Back in March 2016, Apollo’s wife, Phaedra Parks and their two sons, Ayden and Dylan, came from Atlanta to pay him a visit. The young children were less impressed with the two-and-a-half-hour visit with their father, wishing they were back home in Atlanta instead playing their video games.

The prison visit was archived in an episode of The Real Housewives of Atlanta. It had been over a year since the boys had seen their father. On RHOA, Phaedra again broached the topic of divorce with Apollo.

Apollo again refused to have anything to do with ending their marriage. Apollo has said before that he’ll do anything to be able to see his children while in prison.

Later, addressing the RHOA camera, Phaedra said, “I see myself happy again, I see myself married again and I see myself divorced.” Currently, Phaedra Parks and Apollo Nida are still married.

On the drive back to Atlanta, Phaedra told her mother Regina Bell, “He did make a point to tell me that he won’t sign that paperwork I’m trying to get him to sign. Anything to prolong it.”

So CDL readers, do you think Phaedra and Apollo will ever resolve their issues? Will Apollo Nida ever grant Phaedra Parks a divorce? Keep it here at CDL for all the latest celebrity gossip.